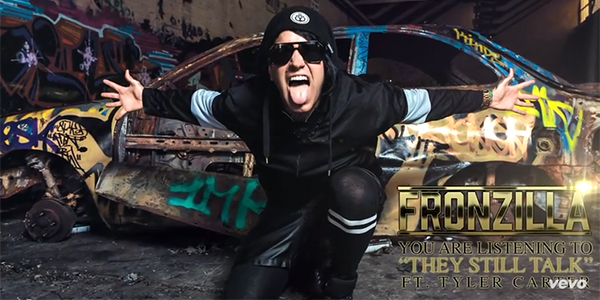 Remember that rap album Attila frontman Chris Fronzak had been working on under the moniker Fronzilla? Well, after roughly a year of delays, said album will be out in just a few weeks. Titled Party Peoples Anthem the effort will hit streets on June 30 through Artery Recordings. Moreover, Fronzilla has debuted another new song from the album. The track is titled "They Still Talk" and it features guest vocals from Tyler Carter of Issues. You can listen below. Party People's Anthem track listing: 01. Turn It Up 02. Next Level 03. In Too Deep 04. They Still Talk 05. Trapped 06. Creeper 07. Party People's Anthem 08. Funkylicious 09. Get Buck 10. Zilla 11. I Ain't Trippin

HAHA FRONZ HERE. THIS IS IT EVERYBODY. MY NEW ALBUM IS DROPPING. LET THE HATING BEGIN....SUCK MY F U C K

The lyrics are awful but at least the beat is generic.

I'm not sure I understand the reason he's standing in front of a car with no wheels.

THANKS FOR THE FEEDBACK. MY LYRICS ARE REAL AND THE BACKGROUND IS HARD AS F U C K. - FRONZ OH YAH HATERS R MY MOTIVATORS

Froyozilla is the only one who's ever talked shit. Literally and figuratively

he seems cool, and by that I mean a huge fa99ot

FOR SURE FOR SURE. I DONT FEEL LIKE I TALK SHIT I STATE FACTS DUDE. AND IM A FA99OT? I GUESS THATS WHY YOUR BITCH WANTED A RIDE IN MY RARRI. SHE EVEN KISSED THE TIP HAHA.

get off da hatorade ya'll his shyts so TITE. he da nxt m&m. ps that pic makes my c-ck hard as fuqq. tongue all out hood up like lemme have dat diq.

For a guy that calls everyone fa*got, he sure likes to tell everyone to suck his c*ck alot.......um " WHO'S THE FA*GOT NOW?" Id rather listen to Riff Raff on repeat than this MTV Made moron.

THATS GAY AS HELL DUDE. I DONT DO THAT SHIT. ITS COOL IF YOU DO. AND WHERES THAT SUPER HATER PHIL H(OMO) ANSELMO. THIS IS THE CALLOUT PT2 -FRONZ

Few notes here: 1. Why is this on lambgoat? 2. I'd rather stick toothpicks in my pee hole than listen to this. 3. Why isn't this on his super awesome label? 4. Is there a petition I can start to have this erased from the face of the Earth?

GARBAGE RAPS/BEATS. GOOD LUCK TO YOU, THOUGH!

I took a big ole poo earlier and it splashed on my bum... I hate when that happens.... Oh yea i hope this guy knows in 5 years he'll probably be broke.... Terrible just terrible

28 year olds who still go to highschool parties are stoked.

Juggalos are stoked. This is terrible.

Juggalos would love this garbage!

Real talk, at least the beat is decent. Better than the garbage metalcore they attempt to play. Fronzlife

ICP is way better than this crap. Fronz needs to eat fart.

I don't get it...Is this a lonely island spin-off project? Something that started as an SNL skit?

I heard a rumor that he is signing to rich gang

The man will eventually Die.

Roger Klotz bumps this album while he pounds Patti Mayonnaise

I made it to 42 seconds. Completely awful.

sounds like a poopier hollywood undead. which is really a bummer for all

YO ITS ME FRONZ AND MY DAD TOUCHED ME THATS WHY I AM THE WAY I AM,,, HARD AS fck DUDE! SO ALL MY HATERS CAN fck MY ASS. ILL KISS YOUR DAD. SUCK MY fck HATERZZ gay.

this fnking douche is starting to make me actually like frankie palmeri ...now that folks is pretty hard to do

HATE ME OR TALK ABOUT ME. EITHER WAY IM ON THE TIP OF YOUR TONGUE LIKE THE TIP OF MY dck. -FONZ

In 2-3 years Attila will be playing Gathering Of The Juggalos, mark my words

Just to break down the numbers; if somehow he had the credit & history of income --totally excluding massive down payments, Fronz would owe 10k per month in order to lease those cars he claims to own. 10k per month in cars not even accounting for insurance on a Ferrari, Mercedes, etc.

Then you tack on the thousands for his house and costs of living --where is he getting this cash from? He claims *ambiguously* that it's from all of his "businesses" but that APP he owns is a flop, his record label has signed 2 bands and sold no records, his cologne isn't profitable. And he's publicly claimed that he doesn't make any money from Attila's album sales.

So basically, it comes down to income from touring and income from "Stay Sick" shirt sales. If somehow Fronz sells 500 shirts a month, he's only making 2500-3000 in profit. The idea that he's selling 500 shirts a month is a total overestimate, considering merchnow is his main web store and his shirts rarely are top sellers on the site.

of course jemenez likes it, hes a rich suburban bitch who still lives in mommys basemenr

Now for touring --say Attila gets a guarantee of $3000 per headlining show (another overestimate) and plays 20 headlining shows per month (yet another, overestimate). After all expenses are paid the most Fronz himself could possibly be making per show is about $300. So after it's all said and done, each month from touring he makes 6k. So we add up all of these *best possible* senarios for where Fronz is making his cash every month, and it STILL doesn't equal what he owes per month in cars.

HAHAHA KEEP WORRYING ABOUT MY MONEY. DUDE IM JUST EVERYWHERE WHEN IT COMES DOWN TO IT IM ABOUT THAT LIFE OF MAKING MONEY. - FRONZ

Fronz is about that life of telling kids he's rich and a genius business man, when in reality all of those cars are probably under someone else's name.

WHy is this on Lambgoat? LG please stop with this Attila band and all related reporting. Get your shit together. There is more going on than this. WDo a bunch of 20 somethings run this website? It seems like it.

Appreciate the shout out, i think i know how Fronz feel. All you pussies hatin, yet you ccan't stop talking about me huh bitch? Lol garbage.

Is Emmure on this? i swear my captcha was666

In 2-3 years Attila will be playing Gathering Of The Juggalos, mark my words ^^^^^^ next year

You're forgetting that this guy owns (most likely rents) a house in some armpit town in Georgia or another state no one cares about. So yeah, have your cars and house in some shithole with 15 people wondering what tranny just moved next door with electricity and running water.

I remember my first few years touring, I thought I was the shit too. Then I grew the fck up. P.S. Band in NYC named Fatality had a song called "In Too Deep" that was miles better than anything this twerp with a bank account balance of Dads check book, ever will do.

"Fronz is about that life of telling kids he's rich and a genius business man, when in reality all of those cars are probably under someone else's name." Aka his girlfriend who has a real job that'll leave his ass in 2 years when he's broke and his 15 minutes of fame are gone

Another project funded by his trust fund. Why hasn't anyone kicked this guys ass yet?

I couldn't make it past 0:27. You know when you hear someone talking and you cringe our of embarrassment for them? That's how I just felt

MTV's MADE producers are stoked

there is no depth to this music, no consideration to anything other than "dope beat bruh," nothing whatsoever sincere about this music. Making music about people talking shit, or you being a "sick home wrecker cuz." I think if we've learned anything from this it's that A: Lambgoat will post anything, and B: this idiot has lost his mind. In 10 years when no one cares anymore about this burnout, he will be homeless in an alley, eating his own fences and sucking his own dck.

lololololol at being homless eating poop in an alley 10/10. It wont be 10 years before that either, he'll be broke in 3-4 years and be ''that guy'' handing out flyers at the local VFW THEN eating poop in the alley.

"P.S. Band in NYC named Fatality had a song called "In Too Deep" that was miles better than anything this twerp with a bank account balance of Dads check book, ever will do". ^^ HAHA! REDZONE CALLED! THEY WANT THEIR MOSH BACK! ^^^

Fronz needs to dip his head in 3000 toilets and FLUSH

I actually do wanna read about this dude when someone puts a pistol to his ear.

this is probably thee worst thing I've ever heard, id rather rub my ween in broken glass. this dude should get a real job.

Confirmed that fronz's ride are not owned or leased, but rented monthly.

This song translated: "I fck girls, buy cars, have money, and they still talk shit! Why are they still talking shit? Didn't I prove myself enough yet? Oh well I better start making another shitty record with lyrics to validate myself because in reality I'm just not sure of my masculinity." - Fronz PS. Please quit bringing up that episode of Made, it's a little embarrassing and quit talking SHIT!