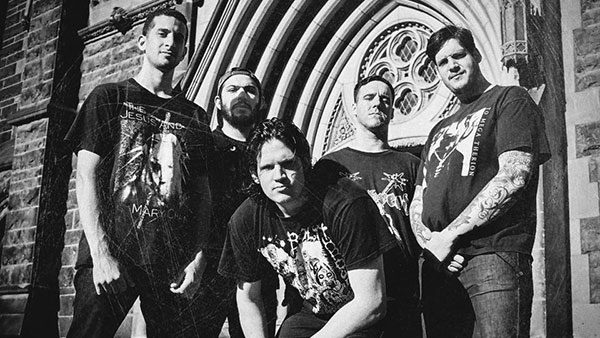 Official press release: Los Angeles, CA-based hardcore act, Twitching Tongues, have struck a worldwide deal with Metal Blade Records. Since forming in 2009, the band has toured the globe extensively, and released two full length releases: Sleep Therapy (2012), In Love There is No Law (2013), and a live album: World War Live (2014). The unique sound and indisputable gravitas that Twitching Tongues wields on their records, as well as live, has turned the group into one of the underground scene's most talked about bands. The immediately recognizable vocal delivery of Colin Young is expertly complemented by guitarist/back up vocalist Taylor Young, lead guitarist Leo Orozco, bassist Kyle Thomas, and drummer Michael Cesario. Recently, the band was featured by VH1 as one of the 15 metal bands you should be listening to in 2015. The article on VH1.com heralded them as "analog and rough around the edges… Twitching Tongues are doing something very genuine, absurdly heavy, and more importantly, interesting." Vocalist Colin Young comments on signing to Metal Blade: "We're unbelievably excited to be on such a great roster of current and classic bands. To be on the label that released "Hell Awaits", "Nightfall", "Those Once Loyal" and others is a huge honor, and we can't wait to join the list of Metal Blade classics." Twitching Tongues are currently working on their highly-anticipated third full-length album, which will serve as the follow up to 2013's In Love There is No Law. The record will be tracked this May, and will be self-produced and recorded entirely at the band's own LA studio, The Pit. The album is tentatively scheduled for a fall 2015 release date. New music, art, and additional details will be made available as they are completed.