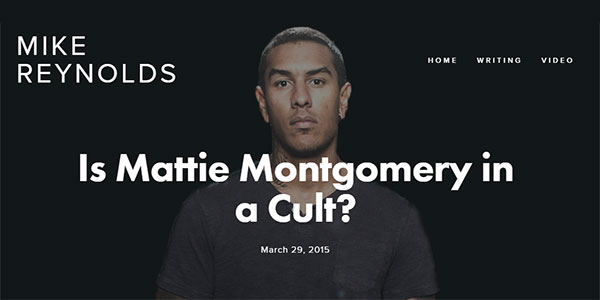 Mike Reynolds, co-founder and former guitarist of Christian metalcore outfit For Today, has published a new article in which he suggests that For Today frontman Mattie Montgomery is the member of a cult. Reynolds begins his piece by explaining his motivations:
I am writing this for two reasons. First, because I served side-by-side with Mattie for 6 years I feel the responsibility to call him to alter his current trajectory and to re-align himself with Biblical truth. Second, because I care about young men and women who would seek to align themselves with Mattie and fall into a spiritually abusive situation. I want to see both Mattie and those under his influence succeed in pure and simple devotion to Christ.
At the core of Reynold's suspicions appears to be Montgomery's involvement in a church that belongs to "a network of churches all headed up by 'apostle' F. Nolan Ball." Reynolds states that in 1986 Ball founded what he says "every sober-minded person would consider a cult." You can read the entire piece here, though its merits appear difficult to discern for anyone not well-versed in theology and/or American Christianity. Furthermore, some question Reynolds' true motivation; you may recall that Reynolds and For Today hastily parted ways in January 2013, just days after Reynolds publicly called homosexuality "a sin."

LOL at the permanent retardation that is organized religion.

It's obviouse he's in a cult. They all are. I think it's called Christianity?

Christianity is a cult. Just because something is large and socially accepted doesn't mean it isn't as ridiculous as anything else.

Literally no one would be surprised if this was true...

all religions are cults, not news.

is this a band?

How much mental gymnastics does this retard do everyday? All religions are cults. You're an idiot.

Reynolds should suck Mattie's dck and get it over with. they're all fcking closeted gays anyway

Isn't this a case of the Pot calling the Kettle black? And no, just because the clown in question happens to be black doesn't mean that this is some kind of racist comment... its just kind of ironic or something..

What cult? Just convert to Scientology and go die in Clearwater Florida

Were on tour with these guys for two months. So many amazing stories about these nut jobs. Funniest thing is, the guy who left was the craziest.

of course he's in a cult, he's christian.

He is "the" member of a cult? If he is the only member, I am not sure you can call it a cult, just a single delusional person.

This youtube video was just posted. It's concerning all this stuff about For Today and Mattie. http://youtu.be/ond2_5EVae I

yo this is front from Attila suck my duck for today, I get laid and get paid, butch ducks my duck while I play playstation

f ag calling a f ag a member of a f ag group. gayging it up with fruity gayry... gay

all religion is a cult, also; political affiliation etc

Matty sucked me off until I came in his mouth backstage at a show in Cali once. Then he cried and begged me to never tell a soul. fcking gay

I was raised in a sudo Christian cult till i was 10 years old...

Christianity is a cult, you fcking retard.

"Christianity is a cult" he typed, as he leaned back in his chair. He knew he had done it. He had opened the world's eyes to the lies that was Christianity. "If only everyone was a smart as me" he said, as he took another swig of mountain dew. "Maybe one day."

This homophob c*nt needs to kill himself. Doesn't Christianity preach to love everyone as ur brother and all that crap. This guy is a hypocrite. Well then again so is the majority of jesus freaks. Wake up jerk religion is a scam fairtale and ur wating your life on your knee praying to something that doesn't exist. Maybe if you knew that you would be able to treat everyone equally. Save your hate speeches - the smart people of this world who know better are not listening.

""Christianity is a cult" he typed, as he leaned back in his chair. He knew he had done it. He had opened the world's eyes to the lies that was Christianity. "If only everyone was a smart as me" he said, as he took another swig of mountain dew. "Maybe one day."" LOL /thread

Not a cult, just someone who believes we are apostles

Call christianity whatever you want all i know is jesus brought me back from the depths of death from my heroin addiction something N.A or A.A couldnt do and all the lame rehabs i grew up on metal and glad to see positive bands spread the word of christ cause we all know metal is a way of life and all the satan crap is gay we all know the devils a homo

Easy to point the finger and call Christianity a cult when your vision of acceptance is blinder than that of the most devout Christians. Calling Christians gays and cultists only shows your immature ignorance. The pathetic thing here is not that Mike Reynolds is engaging in massive hypocrisy, but that some of you "anti-Christians" are just making yourselves look like a bunch ignorant bigots. Seems to me like you people are the ones in a cult.

Yeah the cult is called Christianity

Wow, how sad. Geez guys you're both Christians. Can't you agree to disagree? Sounds like sour grapes for getting dumped form the band.