Slayer's new LP to include song with Jeff Hanneman 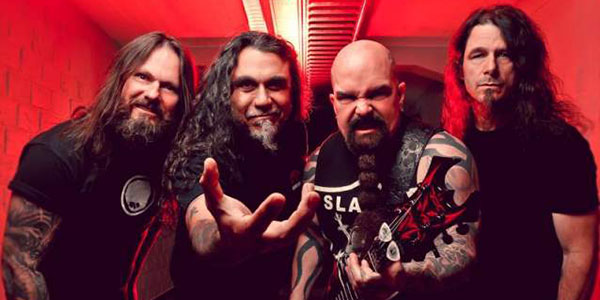 Slayer frontman Tom Araya recently spoke with Revolver magazine regarding progress of the band's forthcoming studio album, due out later this year. "We're in kind of the beginning stages of the finishing stages, if that makes any sense," Araya said. "We're doing the mixing and mastering now, but we still need to sit down and figure out the album title, the album cover, the song titles, and the song list. We've recorded 13 songs for it; we'll probably put ten on there, but who knows? Maybe you'll get lucky and we'll put all 13 on there!" Araya also revealed that the LP will include one track featuring late Slayer guitarist Jeff Hanneman. "The whole process of this album started three years ago, when Jeff was still a part of it," explained Araya. "There is one track on there that we recorded with him, that he did play on, which was completely done except we hadn't finalized the vocals for it. So we were fortunate to have something that he had participated in." "Ever since his passing, it's been like that—just odd and strange, because he's never gonna be there again, you know?," Araya added. "Even when we were doing stuff without him while he was still alive, that felt strange. Yeah, I missed him during the process. But the way things turned out, I think he was definitely a part of it, even if he wasn't there physically."

but when is creed going to make a new album

Why wasn't Jeff able to tour when he was alive?

have a 3D jeff hanneman on tour or no care

this is great news and they've still got it, in my opinion. they were great this recent tour w exodus

BREAK DAIRY KING'S WAH WAH PEDAL!!! Seriously, him and Kirk Cam...I mean Kirk HAMMETT should start a band together! They could have all kinds of Dueling Wah solos! Think of the possibilities! Those two together could maybe...probably...most likely OUT-WAH anything that Snakk Wylde could Wah. Or not? But who cares? Just make it HAPPEN!!! Pretty please? Thank you. Love, The planet of Earth that still has hearing. <3 P.S. While you're at it, break up.

Why can't there bus get broken into and all there gear and shit stolen so they can't tour no more . Gzzzzzzz fck slayer

Just like Lombardo said; Slayer will continue exist as each member falls out, controlled by greedy labels. Sad.