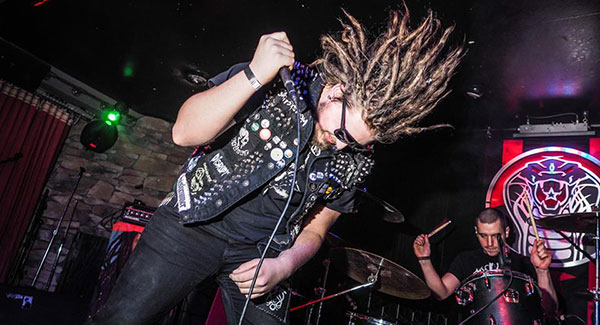 Members of a Fort Wayne, IN thrash/death/black metal band called Nuclear Hellfrost allegedly disrespected the grave of late Pantera guitarist Dimebag Darrell, then went on Tumblr to boast about it. The since-deleted post (the Tumblr account has been deleted as well) showed a photo of the grave with the following caption (you can view their photo/post below):
"i HATE pantera...with a passion. and so does the rest of my band. so on tour going throug texas we paid douchebag darrell a visit, we spit on his grave, stole a pair of cowboy boots, and i wrote "FAG" on his grave... i'm not a homophobe but i hope all panturrrra fans see this and shit themselves with anger....FUCK DIMEBAG, buncha racist hillbillies"
Not surprisingly, it seems as if this fellow has gotten his wish, as a firestorm is currently brewing amongst Pantera fans, many of whom are using the Internet to threaten the band with various forms of bodily harm. You can have a look at Nuclear Hellfrost's Facebook page if you're curious. Thus far, neither the group nor their record label, Eternal Warfrost Productions, has publicly commented on the controversy. The Pantera camp, however, has. Here's what they had to say:
"We are absolutely disgusted by this! We ask that all of you please show Dime and his grave the respect he deserves. This conduct will not be tolerated and the authorities have been notified."
UPDATE: The band has now issued a statement in which they claim that it was their ex-singer who made the original post as some sort of publicity stunt. You can read their statement here. 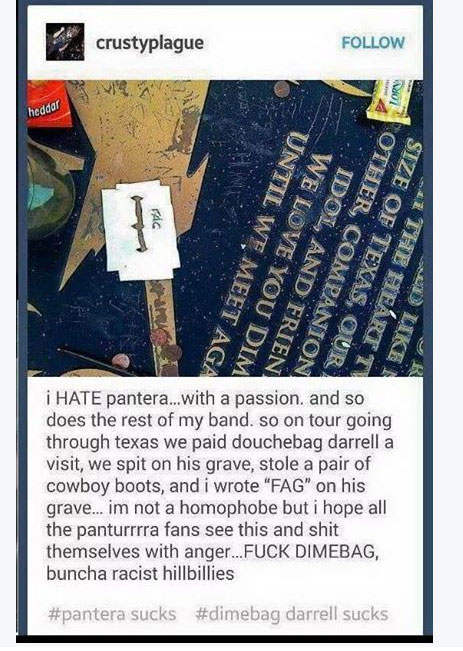