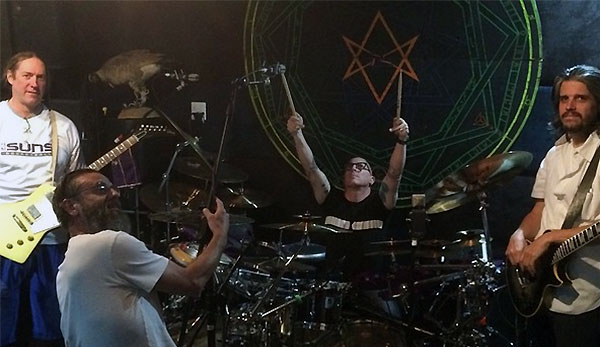 Tool frontman Maynard James Keenan has finally weighed in with some information regarding the band's forthcoming album, the progress of which has fueled intense speculation for months. Notably, Keenan says that "nothing is recorded yet," but he will soon be ready to begin writing vocal melodies for the outing. Here's what he had to say this evening:
"I've been making regular trips to LA to check on the writing progress of my Tool brethren. Things a progressing nicely. Slowly, but definitely progressing. Nothing is recorded yet, but the guys are confident that the pieces are coming together swimmingly and will be ready for me to begin writing melodies and content 'soon'. I'm as anxious to get this album completed as everyone else. But as history will show, you can't rush these gents. Patience is Gold in this Sound Mine. In the meantime, as always, other things are simultaneously occurring. Life is too short not to create something with every breath we draw."

In other words, zero progress on any new material. Cool.

there comes a point in every musicians life where suicide is the only way to make money. do i really need to say what im getting at here

This is exciting non-news!

did he just drop some song titles? Patience is Gold in this Sound Mine

Snorefest. This band hasnt been relevant since 1993.

not relevant since 93? So ur saying Lateralis sucked? Good luck with that one

"people in their 30's who work at oil change shops and who take mini thins are stoked" HAHAHAHAHHA. Sad but true

I wonder if Danny Carey still has a Lamborghini.

just what i needed, an irrelevant update from some tool frontman. p.s. why the fck are the captchas all of a sudden arab words?

So what have these dudes been doing for the past 9 years?...no pressure