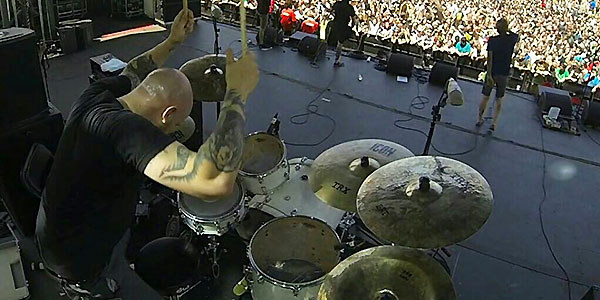 Brad Moxey, drummer for Evergreen Terrace, was seriously injured on February 6 after falling 25 feet from a ladder onto a brick sidewalk while doing contracting work. Here are the details:
"February 6, 2015 was like any other day. Brad got up, kissed me goodbye and went off to work. Brad is a hard worker as a contractor doing home repair and remodeling. He was also getting ready for an Australian tour with his band, Evergreen Terrace, and had gigs lined up with his Nirvana tribute band. I got a phone call that Brad fell 25 ft off a ladder onto a brick sidewalk while working on a house. He was knocked unconcious for over 20 minutes and unaware of where he was once his eyes opened. After a cat scan and x rays the Dr's moved him to a room to get him ready for surgery. His elbow (ulna) was exposed out of his skin. It could have been much much worse falling onto his back/head from such height. The Dr's and nurses all say he is very lucky. His elbow was shattered into so many pieces they weren't sure the extent of his injury. The surgeon estimated a 2.5 hour surgery and plates would be placed in Brads arm, also possibly an additional surgery for an implant. 4 long hours later I got a call that surgery was completed, it took much longer because there were tiny microscopic pieces of bone that had to be taken out of brads arm, reconstructed, then placed back in. Once in surgery they revealed he not only broke his ulna but his radius bone as well. He was missing a marble size piece of bone also. Brad is doing good, he was released from the hospital after a 4 day stay and in pain still which is expected. He has headaches from his fall and some trouble remembering. He will start months of physical therapy to be able to eventually return to work and return to his passion of 20 years, playing drums."
Unfortunately, Moxey and family are now confronting mounting medical bills and physical therapy costs. Additionally, Moxey will obviously be unable to work or play drums for the immediate future, leaving him even more vulnerable to financial calamity. As such, a GoFundMe campaign has been set up, and we wholeheartedly encourage you to give Moxey a hand. For their part, Evergreen Terrace had the following to say:
"A few days ago our drummer and friend Brad Moxey had a terrible accident. Because of this we have cancelled our upcoming shows on Soundwave 2015. Please see the attached GoFundMe link for details. He's uninsured with a baby on the way. We are all in shock."