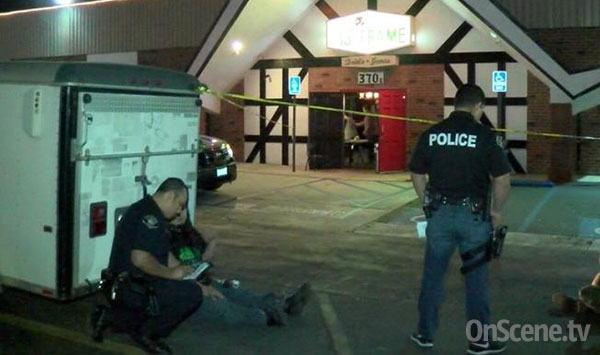 Last night Cattle Decapitation played a show at La Habra 300 Bowl (or the 13th Frame Lounge) in La Habra, CA, and while death metal/grind concerts can get rowdy, this particular one ended with the hospitalization of two concertgoers. Early reports indicate that a man was unhappy after being pushed around in the pit, and retaliated by pulling out a knife and slashing another fan's neck. Other attendees quickly sprung into action and collectively attacked the knife wielding man, knocking him unconscious. Both the attacker and his victim were subsequently hospitalized, reportedly with non-life threatening injuries, and the attacker is expected to be charged with assault. Interestingly, Suicide Silence drummer Alex Lopez attended the show, and he had the following to say via Twitter:

I arrived and so did 7 police cars an ambulance and a fire truck. Someone got stabbed in the neck... Took that decapitation too far...

Meanwhile, another show attendee, Jesse Goytia, had the following to say via Facebook:
"Ok so for those of you that don't know Yes some one got sliced not stabbed at the Cattle D show. The guy that got sliced apparently hit a female who tried to hit him (or did hit him). Females boyfriend sliced the dude that hit her everyone jumped on the guy with the knife and I may have broke the dudes finger taking the knife from him. I was called a hero (I think jokingly) but the cops didn't see it that way. For those of you that didn't realize that was me in cuffs leaned up against Cattle Decapitation trailer. In my opinion both guys are idiots Cattles set got cut by 5 songs and that spot might lose their live entertainment permit. HEY ASSHOLES LEAVE THE WEAPONS AT HOME, DONT HIT FEMALES, AND LADYS IM SORRY BUT STOP TRYING TO FIGHT YOUR MANS BATTLES."