Our friends at MetalSucks noticed this morning that a bunch of As Blood Runs Black fans aren't happy with the band. In June 2013, the band launched a campaign to crowdfund their next album, Ground Zero. They were seeking $50,000 and managed to raise $25,174. According to the campaign page, roughly 100 people paid $10 for an advance digital download of the new album. Ground Zero was released on Monday, and if a horde of posters on ABRB's Facebook page are to be believed, advanced digital copies of the album were never delivered. Here are just a few of the complaints: 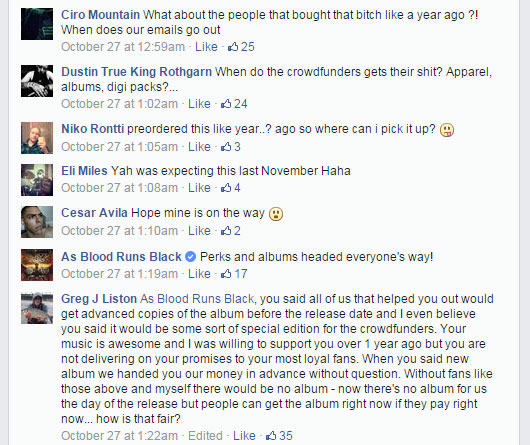 You'll note that one of the comments is from As Blood Runs Black themselves, telling fans that perks and albums are on their way. The complaints continued, however, and eventually As Blood Runs Black posted another comment in which they blame someone else for the mix-up:
"Wasn't our fault. Were on tour right now and was under the impression things would get taken care of. E-mail ABRBfamily@gmail.com to get an update on your status."
We're not sure whose fault it is exactly, if not the band's? Perhaps Standby Records, who is handling a portion of the album release. Regardless, people weren't buying it: 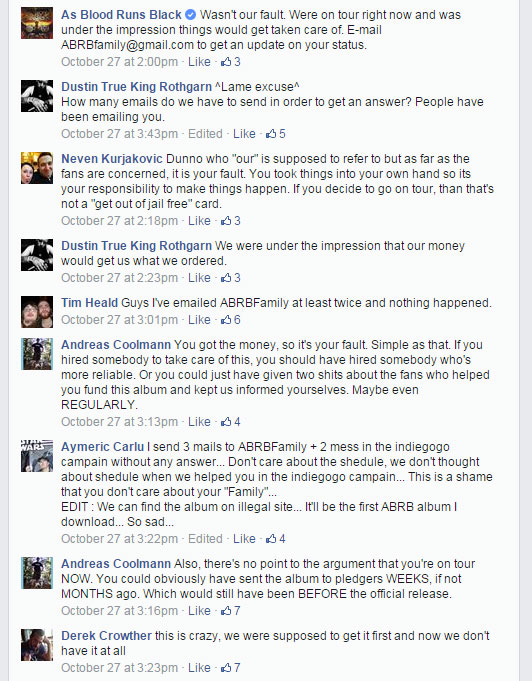 Fast forward two days and the complaints are still coming in:

Thus far, As Blood Runs Black has yet to further address the issue, though we suspect they will.