At The Gates, Converge set for 2015 Decibel tour

The Decibel Magazine Tour 2015 has officially been announced and will be comprised of At The Gates, Converge, and Vallenfyre, and Pallbearer. "Super-stoked at finally getting to be part of the Decibel tour!" comments At the Gates frontman Tomas Lindberg. "A great mag, with great people behind it! And finally being able to rip out new stuff in front of a U.S. club audience? Sweet! The bill looks amazing, too! The most relevant hardcore band on the planet and the fiercest old-school death metal band on the same night as us? Excited!" "We are excited to be part of this fantastic and diverse tour," says Converge frontman Jacob Bannon, who designed the tour logo and art. "For me, At the Gates are one of the most important bands in contemporary heavy music. It will be an honor to tour the country with them." Here are the dates: 3/27 Los Angeles, CA @ The Wiltern 3/28 San Francisco, CA @ The Regency Ballroom 3/29 Portland, OR @ Roseland Theater 3/30 Vancouver, BC @ Commodore Ballroom 3/31 Seattle, WA @ Showbox at the Market 4/2 Salt Lake City, UT @ The Complex 4/3 Denver, CO @ Summit Music Hall 4/4 Lincoln, NE @ Bourbon Street 4/5 Minneapolis, MN @ Mill City Nights 4/6 Chicago, IL @ House of Blues 4/8 Toronto, ON @ The Phoenix 4/9 Montreal, QC @ Metropolis 4/10 Boston, MA @ Royale 4/11 Philadelphia, PA @ Union Transfer 4/12 New York, NY @ Webster Hall 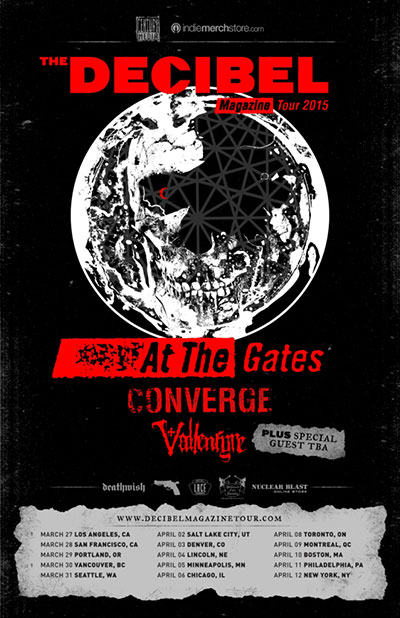