Sick Of It All announces new album

Official press release: After kicking off their European (festival) tour New York Hardcore legends Sick Of It All also announce the release of their upcoming album The Last Act Of Defiance which is scheduled for the following dates: Europe, Australia / NZ: September 29th, 2014; USA, Canada: September 30th, 2014 Asked about what he wants fans to walk away with after hearing The Last Act Of Defiance, Armand Majidi's (drums) answer is very simple: "I want them to feel that they just heard a hardcore record that has everything, from blistering speed to bouncing groove, to heavy and pounding to bright and melodic." The eye-catching cover artwork comes from Ernie Parada, who has already designed posters, merchandise and album art for numerous bands and artists from the punk and hardcore scene such as Hatebreed, Propagandhi, Rancid or The Gaslight Anthem just to mention a few. 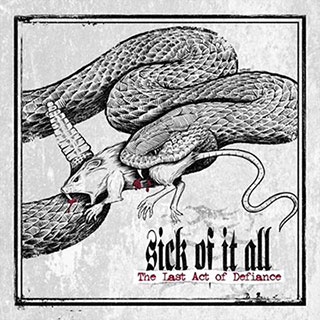 The Last Act Of Defiance was produced by long time friend and producer Tue Madsen who recorded the album at Nova Studio in Staten Island, NY while mixing it in his own Antfarm Studio in Denmark. Armand Majidi about why Tue Madsen is the perfect match for Sick Of It All: "Not only do we get along famously, but he has always understood how to capture the band's intensity in the quietly controlled, less-than-intense studio setting. It was always difficult for us to find an engineer who could capture our live sound before meeting Tue, so now that we've found him, he's our guy." The track listing of the album reads as follows: 01. Sound the Alarm 02. 2061 03. Road Less Traveled 04. Get Bronx 05. Part of History 06. Losing War 07. Never Back Down 08. Facing the Abyss 09. Act Your Rage 10. Disconnect Your Flesh 11. Beltway Getaway 12. Sidelined 13. Outgunned 14. DNC