Although organizers of the Warped Tour have attempted to prevent mosh pits in the past (last year they asked bands not to ask for pits), this year they've gone a step further by hanging banners at each stage that say "no moshing/crowd surfing." Today was the first day of Warped Tour 2014, and a photo of one of the banners can be seen below. 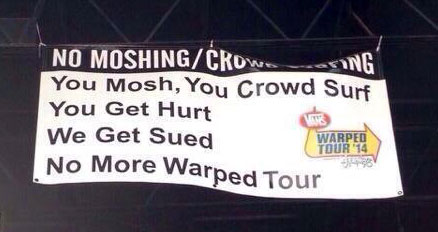 We understand the legal reasons for doing this, but unless they attempt to kick people out for partaking, which would be nearly impossible, it doesn't seem likely that moshing and crowd surfing won't take place. Perhaps just hanging the banners gives them added legal protection? Regardless, reports from today's Warped Tour indicate that some fans are indeed ignoring the banners.