Official press release: Brooklyn, New York's Tombs' have confirmed Savage Gold as the title of the band's third album on Relapse Records. The album is set for a June 10th release (North America), June 9th (UK/World), and June 6th (Germany/Benelux/Finland) and today the artwork and track listing have been revealed. The stunning artwork was created by renowned tattooist Thomas Hooper who has created the band's previous album covers. 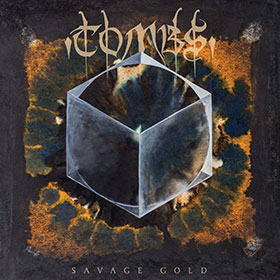 Savage Gold is one the most anticipated underground metal album of 2014 as stated by Decibel Magazine, Revolver Magazine, Noisecreep and numerous other outlets. The band's sophomore LP Path Of Totality unanimously topped 2011 end of the year metal lists (everyone from Decibel to Pitchfork to NPR, and more, dubbed it their top album of that year). Savage Gold focuses the awesome strength of Tombs' previous works into one brilliantly dark post-punk and extreme black-metal masterpiece. Recorded and produced by Hate Eternal's Erik Rutan (Cannibal Corpse, Goatwhore), Savage Gold both expands upon the moody post-punk foundations that Tombs' prior albums explored while also bringing out the band's most traditionally metal moments yet. Once every few years a record comes along that sets a new benchmark for what can be done in heavy music. This is that moment and this is that record. Savage Gold track listing: 01. Thanatos 02. Portraits 03. Seance 04. Echoes 05. Deathtripper 06. Edge of Darkness 07. Ashes 08. Legacy 09. Severed Lives 10. Spiral