Alexisonfire has formally announced a new limited edition box set, including long out of print titles and recordings never before available on vinyl that span the band's entire career. The set is limited to 1,000 copies and can be purchased for $250 (plus shipping) here. According to member Wade MacNeil, "This boxset is every record nerd's dream." 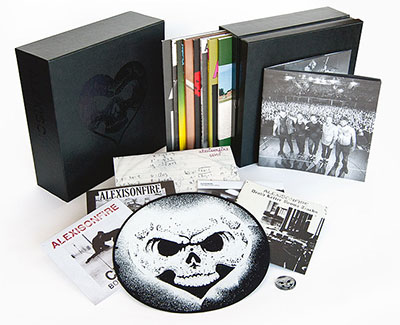 Here's the official sales pitch:
Over a year in the making, the custom-designed box set includes audiophile re-pressings of each Alexisonfire studio release, coveted long out-of-print albums and never before pressed titles. The entire set has been pressed on heavyweight 180g vinyl, almost entirely mastered at 45rpm. The collection includes a never before heard remaster, by Nick Blagona at Jukasa Studios, of the debut album Alexisonfire and two bonus tracks recorded during the Death Letter session. To accommodate the double vinyl pressings, the original artwork has been redesigned in gatefold format. The box set will also feature other exclusive extras including a slipmat and 45 adapter with a trademark heartskull and a photo booklet curated by photographer Dustin Rabin containing photos from the band's final shows in Toronto and Hamilton, Ontario in December, 2012. Special custom shipping packaging has been designed to protect the box set contents. A digital download link, that includes high quality MP3s, will be delivered with purchase.