Official press release: Legendary Southern California metal act, Throwdown, are set to release "Intolerance" on January 21, 2014 via eOne Music. The new LP will be their first since "Deathless" was released back in 2009. Frontman Dave Peters weighs in on the announcement: "Completing this record felt great in so many respects, most important of which was the opportunity to finally give longtime supporters of the band this music that I've had swirling around in my head over the past four years. The variety of people from different places and scenes, who have found the band through vastly different avenues over the past 15 or so years, will each get into it for their own unique reasons I think. And for those who think it's junk, it's only about 28 minutes they have to regret." "Intolerance" combines the massive production punch of the moody, sludgy and powerfully diverse masterpiece "Deathless" (which spawned the Sirius XM staples "This Continuum" and "The Scythe") with the focused resolve of the band's genre-classic-filled back catalog. The big sound that developed on "Deathless" works magic upon the brutal missives found all over "Intolerance," nearly all of which clock in around 2 minutes. "Deathless" and "Vendetta" collaborator Zeuss (Hatebreed, Crowbar, Demon Hunter) returned to mix the new record. 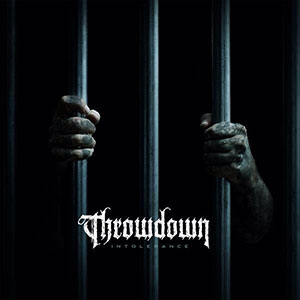 A cornerstone of the New Wave Of American Heavy Metal, Throwdown have earned hard-fought accolades from the likes of Revolver and Metal Hammer magazines, who likened the stomp of "Venom & Tears" to Pantera. Following Dave Peters switch from guitar to vocals over twelve years ago, the band delivered the songs from "Haymaker," "Vendetta" and "Venom & Tears" on celebrated tours with Lamb Of God, Killswitch Engage, Machine Head, In Flames, Korn, Fear Factory and Cavalera Conspiracy and at major festivals around the globe, like Download UK. Drummer Jarrod Alexander (American Nightmare, Suicide File, My Chemical Romance) made his first recorded appearance with Throwdown on "Haymaker," returning as a session player again for "Deathless" and the brand new album, "Intolerance." The new album was recorded at Hurley Recordings in Costa Mesa, California with rising producer Davey Warsop and mixed at Planet Z. "Intolerance" features guitar solo contributions from Dave Nassie (Bleeding Through, No Use For A Name, Infectious Grooves), who joined Throwdown's recent touring lineup alongside Demon Hunter drummer Tim "Yogi" Watts and "Deathless" era bassist Mark Mitchell. 01. Fight Or Die 02. Borrowed Time 03. Avow 04. Hardened By Consequence 05. Defend with Violence 06. Suffer, Conquer. 07. Cut Away 08. Intolerance 09. Without Weakness 10. Born and Buried Alone 11. Condemned to Live