Northern California hardcore/metal outfit Lionheart will release a new album in January via their new label, Fast Break! Records. The new outing is titled 'Welcome To The West Coast' and will hit streets on January 14. The first new song from the album will make its online debut on December 2. 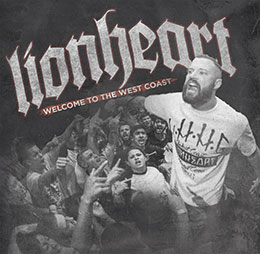 Lionheart vocalist Rob Watson comments: "It's been almost two years since undisputed came out and we're excited to be putting out some new music. The most important thing for us this time around was being able to do things on our own terms, and how we wanted to do it. We reached out to our friend Tony from Fast Break! Records, and he and everyone at that label have been awesome to work with. We had a great time writing and recording this and it came out exactly how we wanted it to: simple, straight-forward, and heavy."