Attila, Upon A Burning Body, The Plot In You tour

UPDATE: Dates have been announced and can be found here. Attila will headline "The About That Life" tour this fall with Upon A Burning Body, The Plot In You, and Fit For A King. Additionally, frontman Chris Fronzak says, "We actually have ONE MORE special guest that will be added to the headliner, but we aren't announcing [it] yet." Dates and venues have yet to be released, but here's the admat: 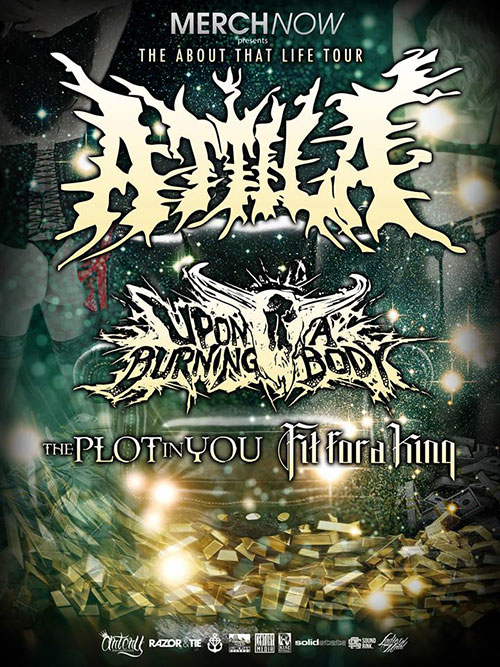 Hell yeah I cant wait for this tour. Never seen fit for a king and only a small upon a burning body set at warped but what ive seen from each band they put on good shows. Bring on all the shitty negative comments from all you douchebag wannabes. Always got something shitty to say about these bands but I bet your no better artist yourself. Like the fck stick who posted above me.

Someone fcked up the original tour name.....The fck everything about this tour

Attila is headlining... Scene whores and the Westboro Baptist Church are stokked.

if this hits FL i'll go wild as hell

T-Shirts for the tour I banged a scene whore, and all I got was this lousy Herp on my dick. (Guys T) I got HPV from a chick Fronz fcked last night. (Girls T)

This should be called the collecting STD's in a van tour.

Ignorant Comments made by ignorant fcks. always need someone to hate on don't you gays? a bands a band they play music they like they have fun while doing it. that's the point dumb fcks.

I love how this tour is sponsored by MerchNow, further proving my point that these bands are more like clothing companies with shitty soundtracks.

"Ignorant Comments made by ignorant fcks. always need someone to hate on don't you gays" Talk about ignorant comments. Go garble some more dick.

Someone is angry about people making fun of this tour? I don't want to live in a world like this anymore. van flip.

Sounds like an awesome tour to go to and let all the air out of the tires of the tour vans. :-)

"Talk about ignorant comments. Go garble some more dick." Ignorant at its finest.

its probably a total waste of time to defend any of these bands on lambgoat. just a heads up to anyone that's actually trying.

Id rather set my wallet on fire than support this... Anyone who is actually defending this garbage... Climb a wall of dicks.

can't wait for this list of places to avoid to be released.