As I Lay Dying's Tim Lambesis pleads not guilty

As I Lay Dying vocalist Tim Lambesis, accused of attempting to have his estranged wife killed, has pleaded not guilty to a single count of solicitation for murder. San Diego news outlet U-T San Diego says Lambesis faces up to nine years in prison if convicted. According to U-T, Lambesis told an undercover deputy that he wanted his wife "gone":
Timothy Lambesis, 32, of the band As I Lay Dying, met with a person he believed was a hit man — but was actually an undercover deputy — and handed him an envelope containing $1,000 cash, his wife's address and the gate security codes. He told the agent he wanted his wife "gone," said Deputy District Attorney Claudia Grasso.
Defense attorney Anthony Salerno claimed that Lambesis "did not intend to harm anybody." Bail was ultimately set at $3 million, and if Lambesis is able to post bail, he will have to surrender his passport and wear a GPS monitoring device. Additionally, he has been ordered to stay away from his wife, Meggan, and their three children. Additional details can be found here. 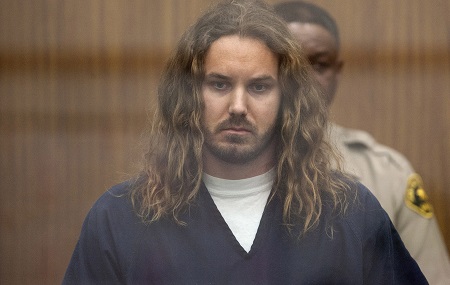 UPDATE: Video of yesterday's arraignment can be seen via NBC's San Diego affiliate.