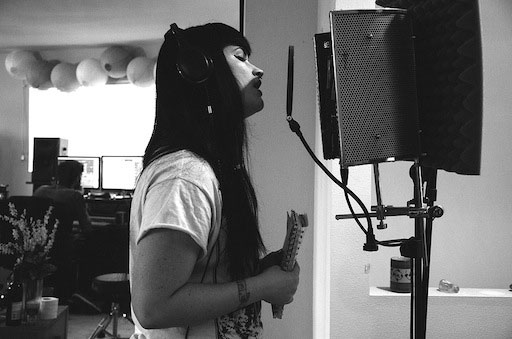 Experimental-heavy-rockers Iwrestledabearonce have announced they're almost finished with tracking their forthcoming, third studio album, which is due out later this year. Currently held-up in their band-compound/recording studio in Los Angeles, IWABO are pushing themselves musically like never before. While known for their schizophrenic sound and unconventional song structure, IWABO is approaching their next record with a new focus and a determination to deliver an album that will surprise fans and entirely re-define who they are as a band. "Well damn! After another two years of non-stop touring, some unexpected twists, and getting to visit some new and amazing places, we're finally back in the studio working on full length number three!," says guitarist/programmer Steven Bradley. "I've 100% NEVER been this excited about an IWABO album, because it feels like we've finally reigned in "our sound" even further and really hit a stride in terms of songwriting. We've always admired bands like Deftones, Cynic, Thrice, Glassjaw, Mr. Bungle, Dredg, Cephalic Carnage, The Mars Volta, etc because they've never made the same album twice, and aren't scared to keep evolving while still maintaining their signature styles. Obviously I'd never compare us to the greatness of those bands, but, in keeping with that mentality, we've progressed a bit more and put together our best collection of songs so far. Bradley who is producing, engineering, mixing and mastering the album himself adds, "the heavy parts are heavier and more interesting, the choruses are stronger, and the "weird twists" that people have come to expect in our music are way more thought-out than in the past and definitely hit harder than ever. Long story short - we're very excited about getting this album finished and released, and we hope you enjoy it as much as we do. Thanks for listening, and keep in touch with us on our facebook/twitter/etc where we will be posting frequent updates!" IWABO's upcoming album will also be the debut of the band's electrifying new scream/sing queen Courtney LaPlante, who joined the band with only a 24 hour notice in between shows on the band's run with Warped Tour in 2012. Her contributions to the new music have not only re-energized the band but have also allowed them to explore new growth as a cohesive unit. "Since the day I joined this band, I've been anticipating this album!," says LaPlante. "I was pushed to the limit creatively and technically, and I've never been more proud of myself or my bandmates. We've been through alot this year, and this is the pay-off; the result of our experiences. Most importantly, I think IWABO fans both old and new will really enjoy these songs, and we can't wait to play them live for you this summer!" Keep up with the band's progress in the studio here.

Like Moths To Flame fire bassist Aaron Evans, "he has abused the platform he was given"
Against Me!’s Laura Jane Grace and Life of Agony’s Mina Caputo get heated over social media post
Andy Williams currently not involved in Ex-ETID members band
Pantera removed from Rock am Ring and Rock In The Park 2023
Glass Casket sign to Silent Pendulum, new album in the works after 17 years
more top news