Official press release: Hatebreed will release their new studio album The Divinity Of Purpose on January 29th, 2013 in the United States/Canada and on January 25th in Europe. This is Hatebreed's sixth album to date and first for new label partners Razor & Tie in North America and Nuclear Blast in Europe and various additional international territories. The band is also pleased to reveal the new album cover artwork for The Divinity Of Purpose which was created and illustrated by Eliran Kantor. 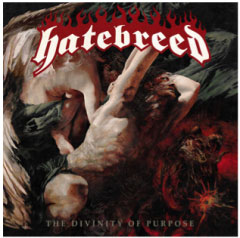 The Divinity Of Purpose was co-produced by Hatebreed, Zeuss (Suicide Silence, All That Remains, Shadows Fall) and Josh Wilbur (Lamb of God, Avenged Sevenfold). Wilbur also handled mixing duties on the new record. This album is the follow up to Hatebreed's self-titled album and also their covers album, For The Lions (both released in 2009). The forthcoming new album will be supported by extensive global touring that will stretch well into 2014. Hatebreed is currently on tour with Lamb of God, In Flames and Sylosis and in January 2013 ,the band will headlinethe EMP presents Persistence Tour 2013 in Europe.