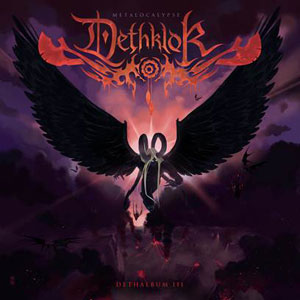 Dethalbum III will not only be released in its original CD and digital format, but also as a Deluxe Edition CD/DVD and a clean version of the CD. The Deluxe Edition CD/DVD will include a 32-minute behind-the-scenes documentary of the making of Dethalbum III, as well as music videos and much more. A vinyl edition of the album with special etching will be released on November 6, 2012. The full track listing for Dethalbum III includes: 01. I Ejaculate Fire 02. Crush the Industry 03. Andromeda 04. The Galaxy 05. Starved 06. Killstardo Abominate 07. Ghostqueen 08. Impeach God 09. Biological Warfare 10. Skyhunter 11. The Hammer 12. Rejoin The fourth season of Metalocalypse, created by Brendon Small and Tommy Blacha with Small executive producing, recently wrapped on Adult Swim and will be released on DVD and Blu-ray Disc on October 30. Along with all 12 episodes from the series' fourth season, the Metalocalypse Season 4 DVD and Blu-ray releases will feature more than two hours of special features. Highlights from those features include a 90-minute feature film of Nathan Explosion tackling his latest Shakespeare reading, in "Nathan Reads Shakespeare 4: Comedy of Errors," a series of band member "StaresDowns," a look at Dethklok Fan Art, "MurderThoughts," a "Pickles Flyby" and much, much more.