As you may have heard, Emmure frontman Frank Palmeri's Cold Soul clothing line was recently shut down. Said clothing line, which features shirts seemingly glorifying violence, has been maligned in particular for its use of imagery from the Columbine tragedy. If interested, you can view some of the shirts here. 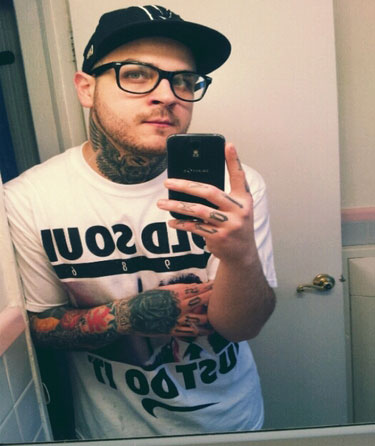 Anyway, in late July the online store for Cold Soul, run by All In Merch, was shut down with no further details disclosed. In the interim, Palmeri has been silent on the matter. However, since news of the Cold Soul store closure has been making the rounds during the last two days, Palmeri obviously felt compelled to address the matter and has released the following statement to Metal Insider:
Hello everyone, first of all I would like for you all to know that it wasn't All In Merch who shut down the store. It was entirely my decision for the webstore to be removed and all Cold Soul orders be terminated, All In Merch played no hand in the "shutting down" of my Cold Soul webstore. Now , the question is raised. Why? Why did I decide to overnight shut down a project that I put my time and faith in to [sic]? And to many who might not believe or want to was a growing business for me and was succeeding more and more on a daily basis. Let me say before continuing that the goal of Cold Soul merchandise was not to be promote bigotry, racism, or exploit the pain and loss of others. I do not condone violence against people no matter what race or creed. With that being said, I also do not act like these things are not going on in the world around me. There is something to be said about the things that occur in our life time that shape and mold our moral values and feelings, my clothing line was a direct reflection of that. I am no stranger to loss, sadness, or hatred. I used Cold Soul merchandise as a way to circumvent those feelings and turn it into something people can stand behind. We live in a society that is constantly shoving in our face the harsh reality's [sic] we live in through mass media . News reports of death, murder, social decay have become the norm and [sic?] the information age and I for one do not shun or act like it is some kind of fantasy. We cringe from the thought of real life catastrophes but will spend hard earned money to watch these things re-enacted in film, on television, and an even more interactive medium, video games. Everyone being fine with offensive material, until it actually offends, IS the joke. Even as I am writing this, I am watching an action movie, with an over the top amount of senseless, tasteless violence. But I understand that this is a product of entertainment. It is something to be bought and sold based on supply and demand. Not everyone has to enjoy this product, but there is a market for it none the less. I am sure there are people who probably would not be able to sit through what I just witnessed and that is OK. Maybe they are sensitive to what is happening on screen and that is fine. No one is forcing them to think that this is cinematic art. Which it is. The shirts were made to be offensive. They were made so people would remember harsh realities. They were made to attract notice, and they have. To say that they reflect racism or bigotry of any kind though, is absurd. Searching for things to be personally offended by in something that's whole basis was to offend in the first place, not only shows that the point missed you completely, but also that you're part of the satire I was originally trying to disrupt in commercializing these images. Let me get this straight with everyone, I know am hated. That's fine, that's more so to the point, actually. I do not need to be loved by everyone, I think I would have a much harder time coping with reality if I went through life expecting everyone to understand me or what I do or how I feel. In an age where gore and death and horrible past occurrences have been trivialized down by band names, movies, media banter, and in reality, just people striving to become the next front runner by exploiting these things, I wanted to bring the cold realness of things back to life. Maybe I succeeded too well, maybe I was preaching to sheep so well herded that they missed how life works and what matters, and what is really offensive or not. Or maybe I actually just offended a large portion of people that I didn't intend to. I'm never trying to encourage or create new bullying or prejudice to any sort of group or race or class or gender or anyone. But for whatever reason, if that's what people are taking from the line, or getting out of what I've made… then THAT is why I removed the webstore.
Metal Insider has provided additional commentary and background information, which you can read here. Will this be the end of Cold Soul? We're not sure, because Palmeri had the following to say on Twitter just hours ago: "Stay tuned... I haven't thrown in the towel just yet."