UPDATE #2: For a detailed account of what went down, read this. UPDATE #1: Job For A Cowboy drummer Jon Rice released the following statement to Blabbermouth:
"Just to clarify the events that happened this evening, a note was passed to the bartender stating that during our set a man with two knives and a gun was going to hurt people. Cops were called and after the proper precautions were taken, the show set off again, albeit a bit behind. No one was hurt and everyone involved is safe."
Today's Summer Slaughter Tour stop in Tampa, FL was interrupted this evening due to an apparent bomb threat (though according to Metal Injection, it was a shooting threat). The Ritz, on 7th Avenue in Ybor City, was evacuated around 7pm and police cordoned off the area. Roughly an hour later attendees were allowed to re-enter the venue, as police found no credible evidence of anything dangerous. 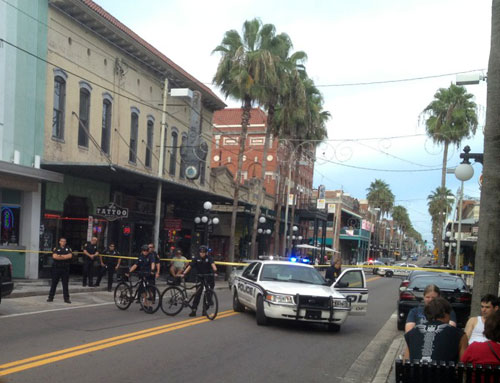 (photo by @tripodofthought) At least the Ritz was kind enough to give everybody a free beverage once the show restarted.