Last night's CBGB Festival show at Webster Hall in New York City was shut down following a violent incident purported to involve Cro-Mags founder and ex-bassist Harley Flanagan. The show was slated to feature Vision of Disorder, Cro-Mags, and Sick of It All. However, shortly before Cro-Mags were to take the stage at 8:15 PM, Flanagan, 42, reportedly rushed into the venue's VIP section and at the end of the resulting melee, one person had been slashed with a knife, and another bitten. According to the New York Post, security was able to subdue Flanagan, who suffered a broken leg amidst the chaos. Police handcuffed him to a chair and removed him from the venue. 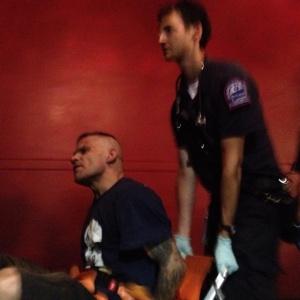 photo from Boweryboogie.com Among the victims was current Cro-Mags bassist Michael Couls, who suffered cuts to his arm and stomach. Neither injury was deemed to be life-threatening. The show was promptly shut down, with Cro-Mags singer John Joseph telling the audience, "You can all thank Harley Flanagan for ruining the night for everyone." Festival organizers issued the following statement:
"We are saddened to learn about the events that occurred last night at Webster Hall. Our primary concern is always the safety and experience of New Yorkers, music fans and the general public. Naturally we will fully cooperate with law enforcement while hoping for the speedy recovery of those injured. Live music can be incredibly uplifting, empowering and positive. We don't feel the actions of one person should overshadow four amazing days and nights of events that include Saturday's historic and unprecedented free concerts in Times Square and Central Park."
Update #1 (7/8/2012 10:26 AM): Cro-Mags frontman John Joseph has issued the following statement:
"We as a band are truly sorry for the way it all turned out in every regard even the ex-member whose family is now effected by his choices. Our prayers go out to them as well as Mike C., and the others who were hurt, but it was 'his' choice to come to our concert with a hunting knife, standing by our dressing door. Who knows what his actual intent was, obviously he wasn't there with it to cut bread for a peace offering as he was heard saying outside he was putting an end to us playing without him. Let's move on now and stop the trash-talking. Keep that PMA - that's what we are all about. There's bigger issues on planet earth that need solving and if any group of people can work towards that it is this community of intelligent people. God Bless."