Within the past hour, news has begun to circulate suggesting that Roadrunner Records UK was closing. Further research has unveiled mention of their German offices are closing as well. However, strangely, we cannot yet find a source for all of the buzz. If you know anything, hit us up. Update #1: According to Ed Stone, "Roadrunner cuts today are international and not just in the UK." Update #2: We've been told that Roadrunner parent company Warner Music Group is closing Roadrunner's European offices in a cost cutting move. Update #3: Roadrunner publicist Kirsten Sprinks has the following to say via Twitter: "It's true - we are all out of a job... So, it's safe to say it's a truly horrible day." Update #4: In addition to Roadrunner UK closing, we can confirm that Roadrunner Records Canada has closed as well, with its employees now terminated. Update #5: Billboard has revealed that approximately 36 worldwide staffers have been let go. Additionally, sixteen staffers in the U.S. will lose their jobs as well. Finally, in the wake of the layoffs and office closures, Roadrunner Records founder and CEO Cees Wessels will be resigning his post with the label. Trivium's Matt Heafy has subsequently taken to Twitter to rant: 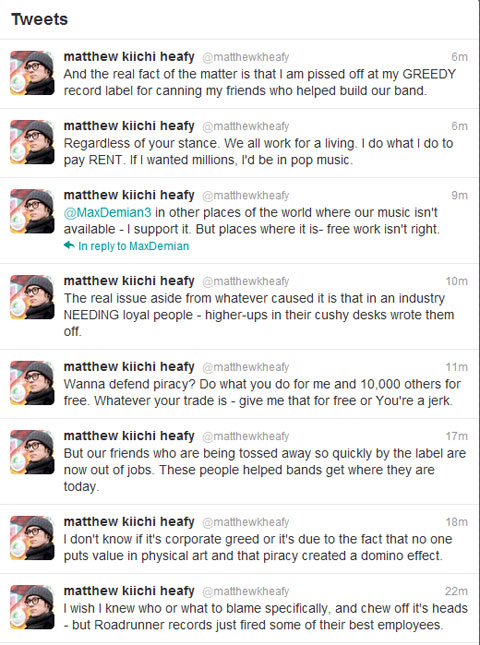