Some stories are too odd not to pass on, so forgive me. Torche guitarist Andrew Elstner has revealed that last week he was treated for a potential rabies infection after a bat urinated in his eye. Read that sentence a few more times. On March 29th, Elstner posted the following via his Facebook: "Ok so... A bat peed in my eye. Whether or not you think I'm telling the truth is irrelevant at this point. What I'm worried about now is rabies. A bat. It pissed into my eye. Gold [sic] help me." After incredulous responses from some of his Facebook "friends," Elstner provided the following background information: "This story is true and a simple one: I housed the James Leg guys at the old house where I used to live in Wildwood. For those unaware, this house was built in 1824 and rests on 70+ acres, and my old roomie who still lives here leaves the back door open so his dogs came roam at will. The dogs are awesome, btw. When we first arrive, it's almost 4am and I'm showing Mat Gaz the house, 'Ok, check it out... Here's the kitchen. And here's like a family room type deal...' I switch on the overhead light/ceiling fan combo and what I think at first is a shadow being cast from the spinning fan blades turns out to be a freaking bat. It circles the room a few times at light speed, and on one of the turns, dive bombs my head and squirts a little nervous pee into my eye. Holy shit. I'm laughing but run to the sink and attempt to flush my eye out. I'm pretty sure I'm fine but... Not the most common of occurrences." Here's a picture of the rustic house in which the marauding bat attacked: 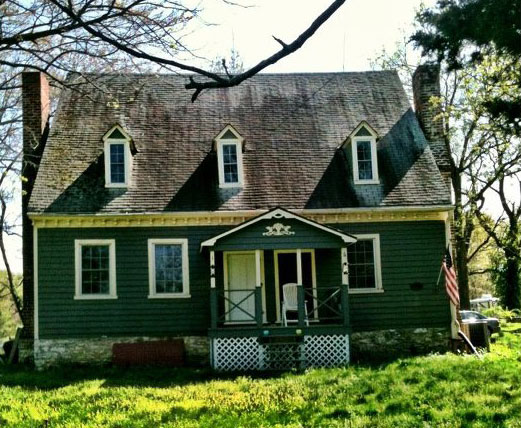 Wikipedia tells me that there are an estimated 55,000 human deaths annually from rabies worldwide (most in Africa and Asia). I suspect Elstner did a little research online and quickly decided that he shouldn't screw around. Either way, apparently concerned for his well-being, Elstner followed up with health officials and reported the following: "Rabies Control and CDC people are telling me I need shots, specifically for the reason I imagined: it could've been saliva AND I slept in the same house with it, could've bitten me in my sleep! What?! I wish I was making this shit up. My info and story were just now faxed to the CDC in Atlanta. Whaaaat!?!?" The following day, Elstner posted the following update: "So the rabies saga continues... Currently in the emergency room at St. Luke's to start rabies vaccination. Such a long dumb story. Extremely slim odds that I'm at risk, but,... With rabies, you have a short window to get treated, and beyond that, it is incurable and 100% fatal. Having said all that, I feel like I'm getting treated for a unicorn bite. Bunch of nonsense." 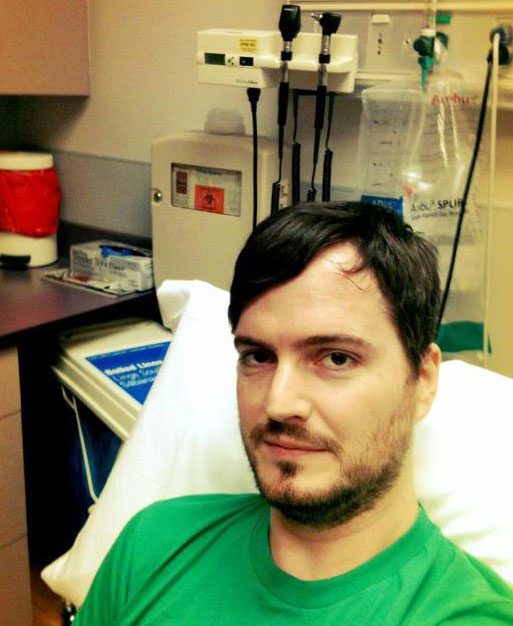 Sadly, Elstner passed away four days later. Ok, just kidding, the dude is fine. We're glad he survived. If nothing else, he'll have something to talk about if he ever appears on a talk show.

the dark knight is stoked.

i guarantee you, especially after hearing about this, that bruce wayne is indeed NOT stoked.

slut5 minutes ago Cancer Bats/Torche Piss In Your Eye Tour 2012 I would enjoy being at that show and listening to that music.

have fun dealing with the HORRIBLE side effects from the vaccinations in like 15 years.

shit like this should be in the news fck that crazy mook who shot up his college that was funny but this is fckin hilarious!

Actually, some Pagans believe that being sprayed with bat urine is quite a blessing. In traditional Pagan culture, the bat is heralded as I am so full of shit. Good luck with the rabid eyeball, broseph.

Eric Salzer wanted it to be him.

a better way to do this is to catch and kill the bat and have it tested for rabies instead of getting the treatments. if you dont have insurance theyre like 5000$. something similar happened to me, so i killed the bat and brought it to the health department. this dude is retarded if hes spending all that money for this.

^ that guy doesnt give a shit that some anon dude on lambgoat gave him survival tips. go play with the little thing thats fuzzy down there

"Gold help me" What is he? Jewish?

This goes to show how music is played by pussies now. Ozzy bites off their heads and this turd gets bit by them.

^ stfu you unknown fcking nothing

slut 12 hours ago Cancer Bats/Torche Piss In Your Eye Tour 2012 THIS.

That is really bad luck. Get well soon.

I guess Alice Cooper forgot his Depends that day

lol what the fck

Andrew Mikhail is not stoked

that house does not look habitable

how the fck does this happen?

anonymous1 day ago This goes to show how music is played by pussies now. Ozzy bites off their heads and this turd gets [pissed on] by them. gold help me.