About an hour ago we were contacted by someone claiming that members of Chelsea Grin and Attila were involved in an altercation last night following a show at Greene Street in Greensboro, NC. The two bands are currently on tour together as part of The Sick Tour. This person alleges that band members "jumped" a local man, nicknamed "Cowboy," who is the singer for North Carolina band Get Rude. If you were to search Google or Twitter, you'll find a handful North Carolina locals saying things like, "Chelsea Grin beat the shit out of some guy last night because he wouldn't give them drugs?" There's also this interesting thread on Chelsea Grin's Facebook. They beat up a guy because he wouldn't give them drugs? Personally, that doesn't sound likely. Not surprisingly, members of the bands involved are saying that the rumors are completely untrue, stating that an intoxicated (on drugs and/or alcohol) man was attempting to get into their tour bus. Chelsea Grin singer Alex Koehler had the following to say via Twitter:
"For the record, I didn't fucking get arrested for trying to buy drugs you idiots... To whom it may concern, I was assaulted for REFUSING to buy drugs off some crazy fuck who was punching our bus, trying to get in... Not everything you hear is true. Think for your fucking self. It's all on camera, and I'm obviously not in jail right now for a reason."
Meanwhile, Attila stated via their Twitter account: "For the record: We had NOTHING to do with the incident in NC last night. We were all in the bar drinking. Chelsea Grin isn't at fault either." Our sources state that what Koehler claims happened is more or less accurate. Regardless, the police were indeed called, and the alleged victim was transported to a hospital via ambulance. 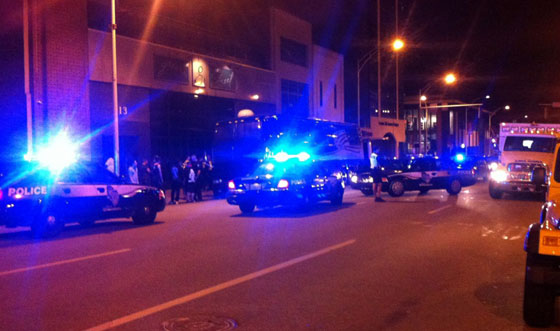 Koehler and others involved were questioned regarding a possible assault. Koehler can be seen below: 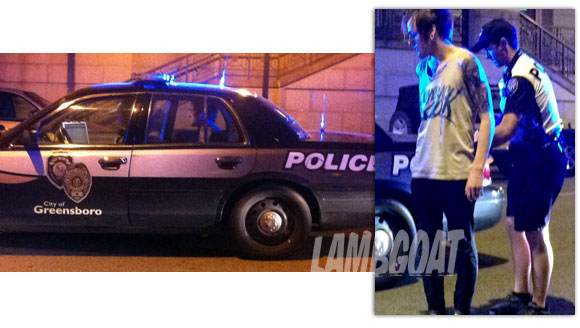 It should be noted that Koehler was NOT arrested, only apprehended. He was not taken to jail, and is not in police custody. Our best guess is that both parties involved were at fault. We know that random people like to harass bands (especially random people involved in buying, selling, or taking drugs). And when that happens, sometimes said random people get more than they bargained for, which in this case happened to be a few too many people punching the same guy. Curiously, a few Tweets from people involved in the melee seem to be disappearing, such as the one below from Volumes member Gus Farias: