ex-Bury Your Dead guitarist on trial for crimes

Former Bury Your Dead guitarist Eric Ellis is currently on trial in Florida, accused of being an associate in a "fledgling" Jacksonville gang. Ellis, age 27, and his cohorts were originally charged with violating federal racketeering laws in early-2011. 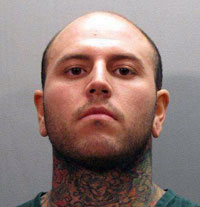 According to the Florida Times-Union, Ellis and fellow defendant Maynard Godwin, alleged boss of the gang, were part of "a group of violent robbers and drug dealers who terrorized residents in home invasions from Ponte Vedra Beach to Beauclerc, robbed banks and beat people." Ellis' crimes, including a home invasion duing which a woman was tied up at gunpoint, mostly took place in mid-2009. Billy Hesson, a former member of the gang and a witness for the prosecution, testified that he, Godwin and Godwin's brother were watching TV show "Sons of Anarchy" one night when Godwin expressed an interest in starting his own gang. Four other defendants linked to related crimes have already pleaded guilty. The trial, which commenced in a Jacksonville federal court on Thursday, is expected to last four weeks. Interestingly, Ellis himself was the victim of a crime in early-2008, when he was attacked with a baseball bat and hammer in Milwaukee, WI.