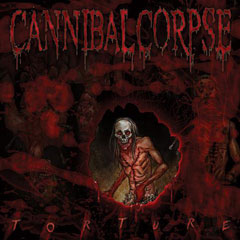 While Torture marks the latest progression in the band's sound, it also witnesses a return to what drummer Paul Mazurkiewicz accurately terms "the frenzied attack of Butchered At Birth (1991) or Tomb Of The Mutilated (1992)," infusing the band's advanced musicianship with the raw savagery that haunted their earlier releases, and in the process conceiving the definitive Cannibal Corpse record. Adds bassist Alex Webster on the outcome of the record: "We're extremely happy with how Torture turned out. Erik Rutan did an amazing job with the production, and the songwriting and performances may be our strongest yet. We can't wait until our fans get to hear the whole thing!" Witness the gutting sounds of "Demented Aggression," the band's first single, as well as studio footage, at the official Cannibal Corpse landing page, or below: Torture track listing: 01. Demented Aggression 02. Sarcophagic Frenzy 03. Scourge of Iron 04. Encased in Concrete 05. As Deep As the Knife Will Go 06. Intestinal Crank 07. Followed Home Then Killed 08. The Strangulation Chair 09. Caged…Contorted 10. Crucifier Avenged 11. Rabid 12. Torn Through As a precursor to the release, Cannibal Corpse will perform a special one-off show at the Culture Room in West Palm Beach, Florida on January 22nd then head to the seas to take part in this year's edition of the 70,000 Tons Of Metal Cruise. The band will get a short break before a near month-long march through Europe on the Full Of Hate 2012 tour with labelmates Behemoth.