Official press release: The Godfathers of New York Hardcore, Agnostic Front, have revealed the cover art and track listing to their upcoming record entitled My Life My Way. Cover artwork was brought to life this time by artist Todd Hubber, who also works with vocalist Roger Miret on designing his street wear clothing line American Made Kustom. 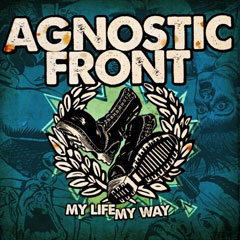 "The concept was to capture the D.I.Y. ethic and crude themed artistry of the early punk flyers, with a nod to the era of crime and pulp comic themes of the early 50's. Society deemed those materials as having no social redeeming values, and as a contributor to youth delinquency. Similarly outcasted were punk and hardcore in the early day for its aggressive, anti-authority message, and dangerous aura. My Life My Way is a throwback to the early days, and Agnostic Front has proven that what society deems unredeeming, has been, still is, and will continue to be relevant." My Life My Way track listing: 01. City Street 02. More Than a Memory 03. Us Against the World 04. My Life My Way 05. That's Life 06. Self Pride 07. Until the Day I Die 08. Now and Forever 09. The Sacrifice 10. A Mi Manera 11. Your Worst Enemy 12. Empty Dreams 13. Time Has Come Agnostic Front have uploaded the first of several video blogs chronicling the making of their highly anticipated follow up to their 2007 release, Warriors. Check out the clip at the following location.