Official press release: Blackened doom Georgians, Withered have unveiled the cover art and track listing for their upcoming album, "Dualitas," due October 26th. The CD and vinyl versions of the record will have different covers, both of which were created by Paul Romano (Mastodon, Trivium, The Acacia Strain), who also did the cover for its critically acclaimed predecessor, "Folie Circulaire." A brand new song will launch next week. "Dualitas," is their third album, (second for Prosthetic Records) and was recorded by Kylesa's Phillip Cope at the Jam Room in Columbia, SC. Prosthetic has launched the pre-order for the album at their official webstore. The vinyl version of "Dualitas," will be a 500 piece limited edition gatefold double LP set on 150-gram wax, which contains the exclusive 33 minute instrumental track, "Dwell." The band will be hosting a "Heavy Metal BBQ and Listening Party" on Sunday, September 26th at 5PM, at the Masquerade, in their hometown of Atlanta. This is an a free, all ages event and will feature free food and giveaways. 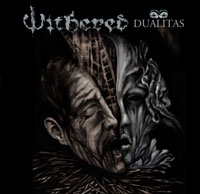 Guitarist/vocalist Mike Thompson commented on the cover and collaborating with Romano: "The artwork for 'Dualitas' is extremely integral to the album. I worked very closely with Paul Romano on the album concepts and philosophy to help influence initial art concepts which in turn influenced the development of the music & lyrics. We are very lucky to have someone like Paul be so passionate about projects like this. With the album being primarily based on multiple perspectives regarding spirituality and life paths, Paul has beautifully visualized it with each character within the layout. He did several paintings for this album that can be found throughout the CD packaging and there are even differing pieces in the vinyl packaging as well. The wonderful thing about our relationship with Paul is that we intentionally never give any specifics or expectations about the artwork. I simply discuss the concepts and send him demos for the album and let him have a completely blank canvas. My biggest fear is that any expectations we may have would hinder the artwork. As a result, we get these images that go way beyond our wildest expectations. Looking at this art generates the same emotions in me as our music does and I hope the listeners can get as much from it as I do. It's truly brilliant." The track listing for "Dualitas," is as follows: 1. Extinguished With The Weary 2. Residue In The Void 3. Seek the Shrouded 4. Interlude 5. From Shadows 6. The Progenitor's Grasp 7. Aethereal Breath 8. Outro