New England metal band The Breathing Process suffered the complete loss of their van and personal belongings on Tuesday following a fire and subsequent explosion. Here's a statement from the group: "Around 3 p.m. we realized our van was smoking and oil was leaking from the rear passanger side tire. We went 3 miles down the road and off the highway to a autobody repair shop. They said we would need a lot of stuff done that cost us more than we can afford. He told us for $30 he would lock our back breaks and promised us we would be able to make it to Portland, Maine safely to make money to get the van fully repaired. He said the van will still smoke and oil will pour out but it won't be a problem because the back breaks are locked. So we took his word, about 20 minutes into the drive we hear a crash to the ground and the whole van sank, we pulled over immediately and jumped out of the van to realize the tire exploded from the heat and the oil hitting the rubber. Also, that it was on fire, we grabbed water to try and put it out and it got worse. We waved people down on the highway and got a fire extinguisher and the flame grew rapidly. After 5 minutes the van was engulfed in flames and the gas tank exploded. The fire was quickly spreading to our trailer. Finally the police and fire trucks came to put out the fire but it was too late for the van and almost too late for the trailor. Our trailor is severly damaged, there is holes in it and fire damage around the whole thing. We searched through the van and nothing is more than just ash. Ren was lucky enough to find his passport sitting in ash, still intact. 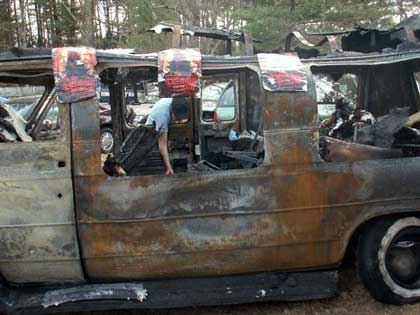 "Everybody's personal belongings are gone, identification, clothes, laptops, cellphone chargers, personal hygiene supplies, our GPS, and of course all of our money. "The police took us to a Dunkin Donuts about a mile down the road to find our way home all the way from Concord, New Hampshire. All of our phones were on the verge of dying. On top of all of this, we called the state police, and also the towing company and they told us that it will cost us $477 to get our equipment out of the garage, especially when AAA called the state police and told them have a towing company covered by AAA come, and they did not. WE HAVE NO MONEY. and the state police tells us that we owe the state of New Hampshire $10,000 for fire damage to the shoulder of the road. They told us it was so bad if anyone was in there no one would have survived. "Luckily Chris' parents are kind enough to rent a Uhaul van with a hitch to come get all of us stranded in New Hampshire, 5 hours away from Milford, Connecticut, and pay the towing company to get our trailer back. Hopefully it is safe enough to drive 5 hours home. "It was a disaster for us. The van is like our second home. Some of us don't even have homes but the van. We are all emotionally depressed but are trying to look at the brighter side of everything. We are all okay, and lucky enough that the van did not catch fire while we were still in it. Keep us in your prayers because the state of New Hampshire is trying to fuck us over royally. "If anyone would like to help us our Paypal account is cdsgds@aol.com or buy our merch online. We are in great debt, and this makes it 10 times worse."