By Alex
The following questions were answered by Bleeding Through in May of 2001, just as they were solidifying a deal with Indecision Records.


So you've just signed with Indecision Records... how did you hook up with them? What does this mean for fans of Bleeding Through? One of our friends gave Dave Mandel a CD and he came to one our shows to check us out. He liked the show and the CD and at the time we were talking with a different label, Dave told us not to talk with them because we had a record label right here. This means that it will be a lot easier to find our releases. The distribution will be bigger and the recordings will be a lot better. People who listen to ______ will probably enjoy Bleeding Through. Any comparisons? Soilwork or Day of Suffering. We have keyboards as Soilwork does and we are just pissed off metal hardcore like Day of Suffering. Do you guys have any lifestyle or political agendas? Straight-edge, etc? We didn't know that political agendas were still in hardcore, but we are all straight edge. How are things going with Derek on drums? Your music seems like it would be fairly difficult to pick up quickly. Derek is working out great. He had to work really hard to pick up the metal style that he wasn't used to, but we are writing material a lot easier now. (Chad) When you're sitting at home and come up with a killer guitar riff, who reaps the benefits, Bleeding Through or Taken? The two bands differ a lot as far as sound goes. Most of the stuff I write is for Taken, but I have been writing some Bleeding Through stuff lately as well. 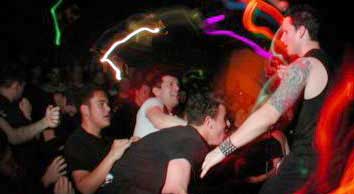 photo taken by Keith Poole
Are you pleased with the way everything turned out on the new album? We are really happy with the way it came out and the kids that have heard it so far have gave a lot of positive feedback If you were going to be locked in a room for 24 hours and had to listen to one album, what album would that be? Molly - Depeche Mode - Best of 82-98
Chad - In Flames - Colony
Brandan - Sunny Day Real Estate - Rising Tide
Derek - Radiohead - OK Computer
Scott - Sarah McLaughlin - Surfacing How did the name Bleeding Through come about? Were there any other names tossed around before settling on that one? Anything like Harry Johnson & the Muffler Men? Well, it is summed up by the explanation that whether black, white, red, brown, yellow, religious preference, straight or gay, we all bleed the same, and we bleed through this life the same. Thus Bleeding Through. You guys are bit abnormal in that you have a keyboard player. How has the feedback been on that? Molly is awesome, she is really talented and we have got a lot of positive feedback since she has been an addition to Bleeding Through. With a couple members playing in other bands, is Bleeding Through a scheduling nightmare? We have not had too many problems yet, but someday we may run into some. Hopefully not though. Who's the leader of this band? Anyone in particular? Who gets pushed around? Scott because he is metal and he's an old bully. Vijay gets pushed around but he's not in the band anymore so we'll see. Besides bands you're involved in, what are some of your favorite up-and-coming hardcore/metal groups? Blood Has Been Shed, Killswitch Engage, Darkest Hour 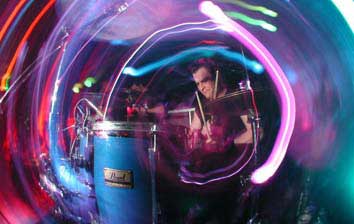 photo taken by Keith Poole
What is your tentative release schedule with Indecision? How long until fans can expect your Indecision debut? Most likely not until the end of the summer because we will be on tour with this band and our other bands we're in. We will probably start recording sometime around September. Your album, Dust To Ashes, has been out for a bit now. How are sales going? How has the feedback been on the release? Sales are really good considering Prime Directive is a small label and it's not going to get the same kind of distribution that a label like Indecision would. At our shows and local record stores is probably where we sell the most. Kids like the metal. Any final thoughts or comments? Thanks for the support, help, and getting our name out there.
Tags: Bleeding Through