By Alex
The following questions were answered by Cave In's Stephen Brodsky in March of 2001.


You guys recently returned from touring the U.S. How was this tour in comparison to previous live experiences? It was great! Our best tour yet. If this one was a flop, we would have had a heart attack, all 4 of us simultaneously. But everything was doubled and tripled, thankfully (except for the drives this time around). Did you notice a change in the size and/or make-up of your audiences? I noticed that the male-to-female ratio in the audience has evened out a whole bunch. I think now that we're attracting less of a machismo type crowd, there's more of an inviting environment for women. Ok, say it's 1998 and you guys are writing Beyond Hypothermia. If someone returned from the future and handed you a copy of Jupiter, would you be surprised by the direction Cave In has taken, or was this in the cards all along? I would be very happy. A big reason why it was so hard to branch out beyond what we were doing then is because of how difficult I found it to be writing for a 5th member. When we ditched a 5th ego, everything became easier and we were able to play music more dynamically. Has the success of Jupiter exceeded your expectations? How have sales been, in comparison with "Until Your Heart Stops"? Well, it's taken us 1/3 of the time to sell as many copies of "Jupiter" as it did for "Until..." Other than sales, "Jupiter" is a record, when I listen back to it, that I cringe the least about. For the most part, older fans have embraced the new "sound", but some hardcore fans are obviously disappointed in the new direction Cave In has taken. Were you prepared for the "hardcore" backlash? Yeah, in a way. I never thought we'd be screamed at during a show, or called "homos" and "fags" for not predominantly playing our older material. But those kinds of things make me even happier that we shifted gears in a way that will eventually weed those type of assholes out of our audience. The most frequent question I see asked by older fans regarding Cave In is, will you ever play the older stuff again live? On the last tour you guys did not. Was it a difficult decision to make? No, it made for better performances all around. It was hard for me to try mixing up older material with the new because I would blow out my voice so easily on those older songs. I get really upset when I can't sing as good as I want to during a show, so by sticking to mostly newer material, I had more consistent good shows. And less bad notes. How important is "listenability" to Cave In? When you write music, do you ever stop and think "people will like that part..." or "...no they won't like that"? It's important to me, to my standards. I hear older Cave In songs, and wish that I had written them differently now. I wish that I had taken another few weeks to mull over them before solidifying them to what they are today. A big reason why we don't play songs from our first 2 CD's is largely due to that we just don't feel like they're very good songs. They haven't stood my test of time. So it has a lot more to do with whether or not I'll still enjoy a song I've written in, say, 5 years from now vs. whether someone else will like it by then or not. Did the Cave In feature in Spin Magazine have any noticeable effect? Did the shows starting getting bigger? Did album sales jump? We're wondering just how much clout Spin has... I'm not sure, it couldn't have hurt, though. That issue came out right before our winter tour, which as I stated earlier, was our best ever. But I think it has more to do with our publicist and our booking guy really busting their asses and working over time on making sure our tour was gonna be a good one. 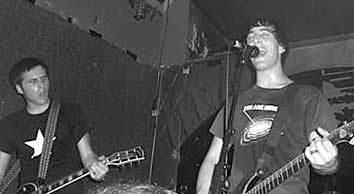 Cave In performing in Boston in 2000
As everyone now knows, you'll be playing with A Perfect Circle in a few days? How did that gig materialize? You're getting paid more than for your typical show, right? Hah hah, we're not making too much dough on those shows. Other bands know this, too: even though it's all about the exposure, the pay is usually very cheap on opener slots for big headliners. Is this kind of show a good opportunity to expose Cave In to new faces, or just a big pain in the ass? I see it as being a big pain in the ass. Other bands know this too, that openers our size usually get treated like garbage from concert staff people and the road crew "higher-up's". It will be interesting though, to play a "concert" of all things. We're always open to a challenge! Is it nerve-racking to have to perform for a crowd that is primarily there to see someone else play? Sometimes I play better when I think there's less of a spotlight cast upon our every move. It'll also just make us play THAT much harder, to get people's attention. How close are you guys to being able to make a living from the band? Will you ever be working at the bagel shop again? Hmmm, well we did pretty well on this last tour... well enough for me to purchase a bunch of old Nintendo games and well enough to have some extra time to indulge in them. As you're most likely aware, there have been rumors floating around of you guys signing with a major label. Your label has denied the rumors. But setting the truth aside, how do you view major labels? In light of the constant "sell-out" accusations other bands have had to endure when making the leap, are you more hesitant to outgrow your indie roots? My view is that no matter where you go, major or indie, you have to surround yourself with people who believe in you and will fight for you like a bulldog. Major label world, in comparison to indie world, is just a larger margin of error, because there are more people to be communicated to. But this is out of your hands. That's why, if you sign to a major, you need to have a good A&R and a good manager to make sure people at the big record company are doing their jobs, and if they're not, then your A&R person and your manager know how to bust their asses so that they GET IT DONE. Cave In has also never been preachy about major vs. indie, so if we do decide to sign to a major, people's political attatchment to the band won't be severly bruised, I hope. Considering past releases, fans currently have no idea what to expect on the next Cave In release. Have you begun writing any new material? Can you give any hints as to how closely the new music will resemble Jupiter? We've only written 1/5 of what I expect to have by the time we do another album. 2 out of the 3 songs we have now are pretty solid to me, and to the other guys, too. I can say that it won't completely abandon "Jupiter", but it's usually the halfway point in writing an album when I really lose my mind and the "less-travelled" pathways begin to appear more clearly. Bonus Question: Were you surprised by the breakup of The National Acrobat? I didn't expect it to happen, if that means anything. I'll still wear the T-shirt.
Tags: Stephen BrodskyCave In