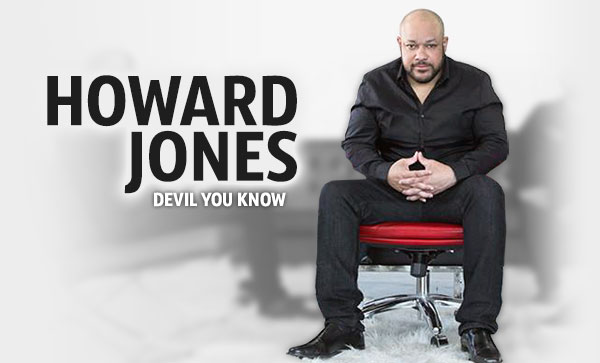 (Devil You Know's latest album, They Bleed Red, is only $5.99 exclusively on iTunes starting on Thanksgiving morning through Sunday night for Black Friday)

Howard Jones is known as a shoot-from-the-hip lyricist who's unafraid to wear his heart on his sleeve. But as much as he's comfortable spilling his soul on record and stage, he's nearly speechless when it comes to the recent violence in Paris that's rocked the music world and left his current European tour under a cloud of uncertainty.

"There's really no way to describe it - loss of life on that level," Jones said from Luxembourg last week. "Really, there's just no way to describe it, especially when it's that close to home and there's people you know that are involved. It's sad infuriating, maddening, confusing."

Jones, frontman for Devil You Know, is on a sold-out theater and club tour in Western Europe with Five Finger Death Punch but they've had to cancel a couple dates since ISIS thugs gunned down 129 people at an Eagles of Death Metal show at The Bataclan in Paris. The night after the Paris carnage, FFDP canceled a show in Strasbourg, France. A second show was canceled in Milan after the shadowy cyber group Anonymous revealed ISIS threats at a series of concerts and events across the globe including at a WWE match in Atlanta, a pair of club DJ shows in France and the FFDP/Devil You Know show in Milan.

"It's rough. I wasn't sure if we were going to end up going home, but these guys wanted to trudge through it," Jones said. "There's no way to explain it. The feelings and the thoughts and the flat-out outrage."

Jones is friends with Eagles of Death Metal singer Jesse Hughes but said he's holding off on reaching out to him until the shock of the Paris attack settles down. When Lambgoat caught up with Jones, he was still unsure of the fate of the tour, but he expressed a deep concern for his fans and fellow artists.

"I'm still trying to process it all," he said. "First and foremost is the safety of everyone who shows up. That's what's important. Everything else is secondary after that."

This is Devil You Know getting ready to sign 10 copies of their latest CD that we're giving away. Simply comment on this photo and we'll pick ten of you randomly.

The Paris chaos aside, for Jones, it's been a long road back from an extended dark period that followed his abrupt departure from Killswitch Engage, a Grammy-nominated group he fronted for nine years. He quit the band in 2009, at the height of their commercial success, and dropped out of sight.

He reportedly attempted suicide, was diagnosed manic depressive and bipolar and spent time in a mental hospital. He was prodded from the darkness when he received demos from Fear Factory drummer John Sankey and All Shall Perish guitarist Francesco Artusato and they cut Devil You Know's debut, The Beauty of Destruction, in 2014.

It was a highly personal return to form for Jones that also saw him back playing small clubs, rather than the amphitheaters he was used to playing with Killswitch.

The band's sophomore release, They Bleed Red, came out earlier this month and is another thundering metalcore tour de force that delves deep into Jones' psyche.

"Just being completely depressed and having crazy anxiety, it just hovers over you and you don't know what it is. It becomes this sort of numbing agent almost," he says. "You want to just turn everything off and just kind of push everything else away and that's pretty much what happened. It was just me sitting in the back of the bus alone all the time. It wasn't a way to live and those guys [in Killswitch] didn't know what to do about it. Now that I've gotten help for it, it's definitely made doing this for a living a lot more enjoyable."

He remains close with the guys in Killswitch, who are some of his best friends, and he admits he misses being in a band with them at times. But he also accepts that what happened was necessary – for his own mental health.

"For me, it's like actually having fun again," he said. "And I know I'm not making the rest of the band miserable because I don't know what's wrong with me. Not knowing you're bipolar definitely makes things weird. Having a better grip on things makes things easier. I'm still not the biggest fan of hanging out with everyone at the show, that's kind of not me. But it's definitely gotten easier. I definitely miss those guys from Killswitch. I had a blast. That was a big important chunk of my life. But I'm happy with this. It's nice to be able to actually enjoy it without that dark cloud hovering over me."

Addendum: Devil You Know did ultimately postpone the remainder of their European tour.

So was that was that a shifty ploy to get us to read an article?

never have i seen someone who resembles an ape more than the motel chain himself, howard jones.

Listened to an interview with these guys on Sirius. They are a funny group of dudes

Horrible band/music. Howard go back and front Blood Has Been Shed you turd.

Terrible band. Terrible song. Terrible video. I hate everyone responsible for this atrocity. They ruined my Thanksgiving.

vocalist is one of the nicest and most genuine dudes i have ever met. i shared a much needed clove with him afterward.

This is barely an interview, and more like a sales pitch.. what, did you talk to him for like two minutes?