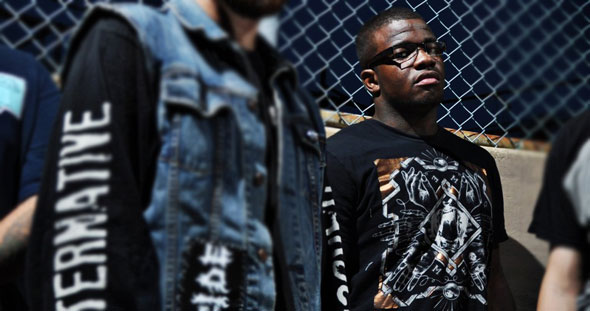 I had the chance to interview the beast/dad/dude hammer known as Adam Warren at the Los Angeles, CA stop of the Scream It Like You Mean It tour. Despite a hiatus shorter than a Nomads song, Chicago's Oceano continues to loom large in the deathcore scene. From white girls to P90X, we cover all the bases.

Okay Adam, what the fuck happened with that pseudo break-up bullshit?

Hahaha. Um, basically you can sum it up as bottomless. Mainly myself, but we all were just kind of shot and you know, pushed to the limit on touring and without being home we didn't have a lot of time to adjust to normal life and get things in order. We were always just on the road for a month or two, back home for a month or week or less and never really had a chance to have real lives. We kind of started off as teenagers and had been touring up until young adulthood and we didn't really... I've been touring since before I could drink a beer, ya know? Anyway, so we all are now older and we just needed a little time to settle into normal life, get sick of it, and realize that we can't handle normal everyday run-of-the-mill jobs for that long and now we're back. We'll probably do the same process and break up in another 8 months.

Do you think the guys over at NEMHF were pissed about you guys not breaking up?

I don't think so. We were considering just not saying anything and making it a surprise, but since we're obviously pretty close with the main man Scott Lee we didn't want to make it seem like we were doing some shady stuff and trying to get a higher slot or trying to make more money then be like oh, screw you guys. We wanted to be straight up about it and just told them; they were still cool with it. They're stoked because they can book us in the future.

Was it just you leaving? What would have happened if just you had left, would Oceano have broken up?

Yeah, basically that's what it was.

'Cause you're the head honcho, right?

No, I'm not the head honcho, you asshole. It's just that there aren't a lot of black guys in metal so they didn't want to work too hard to go to the hood and try to find another one to replace me.

Can we call you Blackchapel?

No. You may not. I mean, you can call us whatever the fuck you want to call it, but I mean, sure! Just on a side note, I don't know why everyone thinks that one's so clever. I don't know for a fact, but no one ever even pulled out the one Impending Coon. That's a better one.

I just spit out my drink. HOLY SHIT. So, remember that one time you did a video where you guys read comments on Lambgoat and responded to them? Who's idea was that?

That's when it first came out, huh? We did that for Metal Injection, I believe it was. It was right when we came out obviously there were a lot of haters and stuff like that. Any publicity is good publicity. Even if your fucking dick is on the Internet. If they're talking about your band, it's whatever.

Ooh! Let's talk about that! This is now an IsAnyoneUp alumni interview. Speaking of dicks on the Internet, Adam… Do you think that was a positive for the band? Do you think more girls like your band now?

Honestly, I don't think it did anything. We're not like a Mayday Parade or some shit like that where it really matters. No one really comes on a site like that and says "Oh, it's so and so from this pseudo death metal band. I've been dreaming of seeing this my whole life." That doesn't happen. I don't think it really made any difference at all.

So your band seems to be a little bit of an oddball on Earache Records, what's your label situation like? Do you think you're treated differently because you're not the typical?

They've supported us a decent amount, I think they probably give us a little more focus because we're more new-school. There are a lot more new school bands coming out now and the younger generation is obviously going to be the one to pave the way to wherever the hell metal is going to go in the coming years. We are that kind of band that's going to cater to the younger generation so they do kind of give us that push, usually… Yeah, they really support us, I mean that's why they got us. They needed a fresh band for the roster, not just all the old-school bands. There's nothing wrong with old school bands, they all rock and stuff like that, but a lot of them have since come and gone from the label. They're either not touring or they're on different labels now. You've got to always embrace what's new as long as it's good. Not saying we're that good, but we get some attention so that's worth investing some money in.

Speaking of future generations, what are some of your favorite newish bands?

They're not necessarily new, but some of the bands that I pay attention to, one big one is Within The Ruins. They're not new, but they're still on the come up. I don't know - what I listen to normally is not metal.

Why does everyone fucking say that?! Oh, I don't listen to that, but I play it. All these bands are saying that they've grown out of hardcore and metal or that they just don't listen to it anymore. What's the deal with that?

I mean, I definitely haven't grown out of it. I still love it. It's just the mood. When I get home from tour I'm definitely not listening to any metal. Maybe a week or two out of being done with tour, I usually go back into the metal zone.

It would probably be Behemoth.

Tell me about the new Oceano album.

We only have three songs written! We're trying to just mix the best of both of our past albums. It sounds lame, but it's heavier. Everyone says that. I want it to have a heavier delivery of music. There will be more atmosphere to it, so like a lot more live production feel to it. Where things that will be on the album that have a big production feel, but we do play live that we don't need any backing tracks or BS for. That's probably the key focus is to make it feel a lot bigger and adding to the mood to whatever the hell I choose to write about. I have a lot of concepts I've been thinking about. It's going to either have a theme or a whole bunch of introspective personal shit, but not too deep.

Hahaha, that would be amazing, but it would just be called Cuck. The first tentative title of the first single, "Cuck," probably won't be out for a while. We'll probably play increasingly more new songs as we progress throughout the next tours we do up until we record and release it. No one will hear anything until the next US tour we do. Puerto Rico and Europe will hear new songs.

Have you guys ever been confused for Oceana? Because I imagine that someone would be really bummed if they were going to listen to them and got you guys with your Satanism and anger.

It started off the opposite. Before it got announced, Oceana got signed to Rise Records and our hearts were just ahhh, great... It was horrible. We were touring Florida where they were from and it was odd.

Did you ever consider a name change? What would be the new name?

Yeah, actually. We were going to change our name to Sons Of Belial because it's metal and it just had the closest relation to what some of our songs were about at the time.

So metal. Personal time! Let's talk about White Girl Wednesday. What do you love about white girls?

You still are a pervert! Do you think that being vulgar and disgusting on Twitter helps you? Do you think your fans eat that shit up? For reference, I was going to bring Adam some booze and I asked him what his drink of choice was, he replied with "pussy juice."

I would say that it actually is my drink of choice. I mean, I wouldn't want a liter of it, but yeah.

What is your one vice on tour?

Hey Nick (Conser, guitarist), would you like to say anything?

We really appreciate Lambgoat. We don't appreciate Shay, she sucks and is a miserable human being. 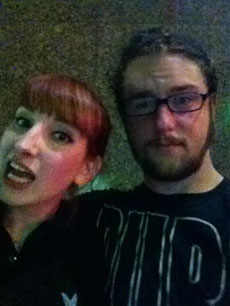 If you could tell your fans anything without them judging you, what would it be?

If you want to be my friend, bring me booze and someone bring me the real edition of P90X cause some kid was supposed to bring it and he didn't.

Do you check yourself out in the mirror after you do your P90X?

Hahaha, no, I definitely don't.

Any advice for upcoming bands?

The perception that people have of your band is very important. So if you want your band to be taken seriously, conduct your band as a serious band.

Yeah, like having your dick on the Internet and talking about cucking all day.

No, that's me, that's all me. When I'm on stage it's a different story. I licked my puke off the stage, did you see it?!

No, I didn't, I watched some girl get knocked out during that part I think. Parting words?

Keep cucking into the fucking new year… You better put that on there. Seriously.