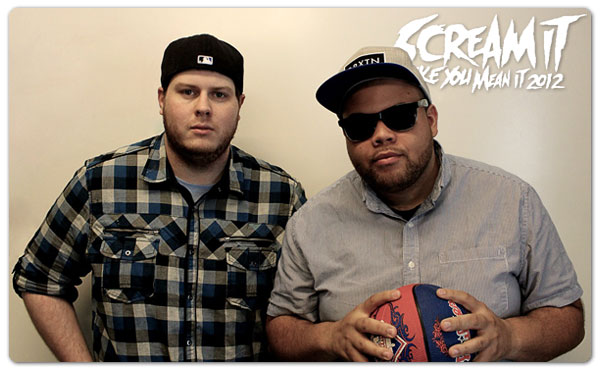 As you probably noticed, Scream It Like You Mean It 2012 was recently announced. The summer tour festival features a lot of big names, including Attack Attack!, We Came As Romans, and The Acacia Strain. We thought it would be cool to do a brief Q&A with tour owners Matthew Stewart and Yogi Allgood (pictured above) for a little behind-the-scenes information.


There are a ton of summer festival tours this year. Why should people attend Scream It Like You Mean It?

Yogi: I think our tour offers something unique by giving the fans a chance to enjoy a solid live show at a low ticket rate. Not many people can experience 18 bands under one roof for such a reasonable price. We also decided to put together more meet-and-greets with the VIP and let fans experience a true vibe of the artist community.

We really work hard and listen to the fans. People don't realize that at the end of the day we are fans just like they are. We put this tour together and by the time the first date starts we are already thinking about what we can do the next year to make it better.

How did you go about selecting the bands?

Matt: We start working on a list end of the year. The first step is finding the headliners. Locking in a headliner for something that is as detailed as a branded tour isn't ever a quick and easy process. After finally locking in a happy headliner we make a list and discuss the lineup we think makes the most sense and what fans will love to see most.

I think we did a very good job doing that this year. You have the big boys in WCAR/Attack Attack!/The Acacia Strain, the upcoming artists Woe Is Me and Abandon All Ships, and a lot of younger acts that will be making noise over the next many years. Also, Oceano returning to do a full US tour is something we're stoked on too.

How do you determine the order in which the bands perform? Album sales? Facebook likes?

Matt: Touring history, CD sales, and overall popularity go into it. There's always hurdles putting together 10-20 bands and discussing what order they go in, but each band knows what they're getting offered before confirming.

Do bands ever complain to you about the order? Something like, "We're bigger than they are... why are we playing before them?!"

Yogi: All bands are going to say stuff like that. It's inevitable. With this tour being in it's third year of existence, a lot bands really want to be a part of it. They realize how much work goes into this tour and most of the bands talk about the past experience. I mentioned this before, but it is really a since of community.

Unlike last year's tour, two different lineups are touring simultaneously and meeting up in select cities. Why the change in format?

Matt: We didn't want to alienate cities we hit previous years and We Came As Romans and Attack Attack! just both did major market headliners. They didn't want to go back in the same exact markets. When we put their routing together we realized there's a lot of major cities like NYC, Philly, Chicago, etc. that have supported SILYMI very well in years past. It took a lot of brainstorming, and one night we decided to just grab another band that would be a great headliner and have it be one giant tour, separated into two on certain days, so it can hit the cities that deserve a date.

You've got some heavier bands this time around too, huh?

Yogi: Yes, we do. We wanted to give fans a bit more to chew on this year outside of what we have previously put together. There are A LOT of talented bands out there and they need to be introduced to some new ears. There are some kids who are huge WCAR/AA! fans, but never listened to Oceano before and vice versa. We want people to have an open mind and enjoy some great new music this year.

What's the hardest part about putting together a tour like this?

Yogi: There are plenty of mountains for us to climb each year with picking out bands, being creative with the marketing, and even booking. Our partner Dave Shapiro books this tour every year as well as being creative with the rest of us on the lineup so it can be a bit taxing at times. I personally spend countless hours thinking of cool and unique opportunities for the tour with marketing, production and partnerships.

This tour takes months to put together, not days. When we sit down and plan it out, we are constantly thinking about how can we make it different than the year before. What can we offer fans that makes them stoked about coming to the shows? I will go out to the shows and pay attention to fans because I want them to have an enjoyable experience at our tour. That's what its all about.

What do you say to someone who says something like, "the last thing we need is yet another festival tour"?

When I was twenty-four years old and joined Outerloop as a young manager, I was studying a ton every day. I was just trying to learn and take in everything that was going on around me on a daily basis. I constantly looked at people like Eric Rushing, Ash Avildsen, and Mike Mowery, to see what they're doing or working on. Pretty quickly I noticed that they weren't just getting great opportunities for their clients or businesses; but they were also creating them if they needed to. That's the difference.

Some people in this industry are great at getting opportunities for their clients, some are great at being creative and coming up with ideas, but few are "all around all-star players." Eric, Ash, and Mike are guys who can do it all, and that's one of the reasons they're so successful at what they do.

Does a band like The Acacia Strain make more doing a tour like this, or a smaller headlining tour?

Matt: The band is definitely doing something cool that a lot of bands won't ever get to experience. They get to headline and support on the same tour. They get to headline some days and bring their whole show production wise and make it their show. However, half the time they'll be able to support Attack Attack! and We Came As Romans, who have combined for almost 500,000 CD's sold.

We treat our bands fairly and the whole point of this tour and the reason we're doing this for the third straight year is because we try our hardest to make SILYMI a positive experience for both the fans and the artists on it.