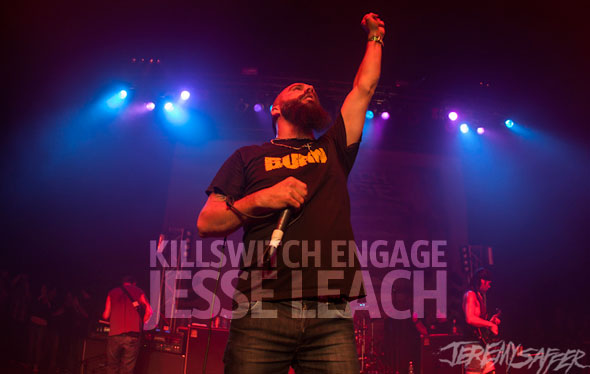 I had the honor of sitting down one on one (well, plus his manager) with Jesse Leach, reinstated vocalist of Killswitch Engage on the last day of New England Metal and Hardcore Fest. I am legitimately bummed that we didn't do this interview on video because Jesse is extremely funny in person. Anyway, it's always nerve wracking when you get to interview someone that actually interests you. This guy was no exception. Jesse surprised me a bit, from his taste and opinions to his demeanor. He is pleasant, intelligent, and dedicated, as he should be. Here's a glimpse into one of the titans of metal.


So we're here at New England Metal Fest. Do you like it, do you hate it?

Hahaha wow! I love to perform it, I love to be here. It's like home, it's like a second home. I've played so many shows here, but as with any festival, it's tiresome. Especially with heavy music, it tends to be sort of same-ish at times. That's my safe answer. The kids are amazing and they support the bands, it's awesome.

Would you rather do big fests like this or smaller shows?

I like both, for different reasons. I love the intimacy of small clubs. I love being able to lean over and put my hand on someone's shoulder and give them the microphone. It sounds really gross, but the essence of the sweat of the crowd, the vibe. I'm a hardcore kid, I grew up in hardcore and that is always going to be a part of me. I absolutely love that, but last year with Times Of Grace I was able to see the festival side of things, go to Europe, play in front of 7 to 10,000 people and there is nothing like that either. There's just something so epic about that. So, I think I'll take both. If I can, ya know? That's why I'm in 3 bands, I can do that.

Cover all the bases right?

Well, people don't give a crap about my other band so I can play small shows!

So as one of the "founders of metalcore"…

It was a quote! I know, it's getting crazy with all these subgenres.

I don't even know what metalcore is anymore…

Well, that makes two of us! So what do you think of all these subgenres and the oversaturation in music right now?

It's definitely oversaturated, but to me it's like, if someone is pushing the genre boundary and pushing to do something different then I'm all for it. I think it's great. Some of it is definitely redundant and metal by numbers and it's very obvious what's going to happen in the song and I'm not a huge fan of that, but to each his own. If you're feeling what you're doing and you believe in what you're doing, then that's the most important. For me, I'm a huge fan of bands that are doing different things.

As far as metal goes… to me the more melodic, the more out there, the more spacey, the more strange, I'm into that. The whole brutal like breakdown, moshcore stuff to me, that's the tough guy stuff. I don't have that much testosterone coursing through my veins to understand that, ya know? But it's valid, ya know? It's cool, it's just not really my style. Which is why I write the way I write, which is why I write the lyrics I write. Me and myself, which is what everyone should be doing. Just be you. Doesn't mean I have to like it.

Yeah, cause people sure don't like what I do, but I'm still doing it.

Are there any new bands that you're a fan of, or newish I guess?

Uhm, Periphery. I have to give those guys props; they are just number one great guys.

They absolutely killed it.

I know! I couldn't go, but I was texting back and forth with Mark [Holcomb] the guitar player and that's just the number one I mean, good people. And that's huge for me. If you're in a band and you're a good person, that goes miles for me. But I mean they are pioneers in their own right, ya know? They took what a band like Meshuggah was doing and is still doing and made it their own, made it more melodic, more interesting and kind of pushed that genre. So I give those guys huge props.

Mastodon, I'm always a fan of those guys. I love those guys. I love what they did on their new record, more rock and roll. They're not afraid to not be metal because to me that's what metal should be. You look at a band like Black Sabbath and put them up against Cannibal Corpse, it's still metal. But I love that about bands when they're not afraid to just do what they're gonna do. That's the first two off the top of my head I would say that are sort of modern.

What's your favorite band in general?

How fucking good is The Clash?

The Clash is amazing. No matter what mood I'm in I can put them on and they fuse two of my favorite styles of music, punk and reggae. You can't touch 'em. They're my favorite band.

Bad Brains would be second to that. Faith No More, old Faith No more, Cro-Mags. Those are my roots. That's the stuff I still to this day, no matter what mood I'm in I can listen to.

I got more, I can get even weirder for you if you want.

Captain Beefheart, I absolutely love Captain Beefheart.I love Miles Davis, Johnny Cash. I like all kinds of music. And I very rarely listen to heavy stuff. I think I've said it enough in interviews, people are just trying to get that about me. I love to perform it, but it's not something that I generally put on. Occasionally I do. I like the mellow stuff.

If you could create any tour, like the Tupac hologram show…

Hahaha oh man, that stuff freaks me out. Number one, I mean I love Tupac, don't get me wrong, I really do. I'm a fan, but it's just weird. It just seems wrong and what is that saying for the generation that's already downloading and stealing music, and not going to shows because they can watch in on YouTube and now they're creating holograms? We don't even need a human on stage for a performance anymore.

You don't know, you never know. They should do a Biggie Smalls and Tupac hologram where they could battle each other; that I would like to see.

But anyway, hologram tour… living, dead, broken up, whatever. 5 bands, together, one show.

Is it weird to play shows like this with bands that are influenced by your band?

Yeah definitely, but it's also kind of cool, ya know? Yeah, it's definitely weird. Yeah, it's weird, haha, but cool.

How's the dynamic been since you've been back?

It's crazy because it's a long distance relationship. I live in New York and these guys are here in Mass., so it's been a lot of email and we had our first rehearsal this week together. That was awesome. I was literally just cheesin' the whole time like THIS IS FUN and those guys are like business as usual. Then when we're done they're all like that sounded really good and it's just like, ahh it's amazing. I'm still going to be weirded out until I step on that stage. I'm still going to be weirded out, probably even more so when I get on stage.

Well the clock is ticking, you only have a little bit of time left. Do you have a pre-show ritual

Absolutely. Yeah, I do my vocal warm ups which is necessary, I pound a bunch of water, I say a little prayer. I usually sip some whiskey or scotch if I'm lucky enough to have that in my vicinity. Do some stretches, breathing exercises, and calm myself down. Just kinda catch the vibe. Sometimes I go out on side stage and peek out while other bands are playing just to catch the vibe of the room.

Yeah, I'm super responsible. I'm the grandpa. Every band that I'm around is always like wow… I go to bed early on tour, like I'm the worst. I'm so not fun, but I care. I care about my instrument.

What can you tell me about the new album?

I'm stoked on it too! Great. Any parting words?

Thank everyone for their support, I'm overwhelmed right now.

I think everyone is pretty stoked to have you back so, not that Howard isn't incredibly great

Oh, Howard is a great vocalist. I have so much more appreciation for that man's talent after listening to his material, studying it and then learning it. I'm definitely a huge fan of his work. I'm doing my best to honor it.

Well, good. Alright then, thanks so much!