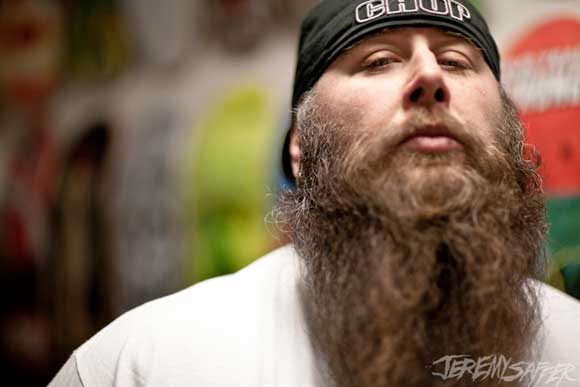 Next month The New England Metal & Hardcore Festival will hold its 14th event. We thought it would be a great time to talk to festival founder and organizer Scott Lee. In addition to the festival and its associated events, Lee is a promoter for MassConcerts and also manages a handful of notable bands, including The Acacia Strain and Mychildren Mybride.

I read somewhere that you started the New England Metal and Hardcore Festival as a response to your discontent with a Milwaukee Metal Fest installment you attended many years ago. True?

This is correct. I sold my soul to get Shadows Fall on this festival. I brought them there and when we went to get our passes, we were treated terribly. I saw a pile of lanyards and asked if we can have some and the guy said "no, who do you think you are?" The band was not allowed to use their own guitar heads. It was just a bad overall vibe.

Matt [Bachand] from Shadows Fall said to me that I could do it and do it a lot better. So I took the idea back to MassConcerts and here we are 14 years later.

What the heck ever happened to the Milwaukee Metal Fest anyway? That was like the country's premiere metal fest for years...

I have no idea. I think it stopped for obvious reasons.

What excites you most about this year's New England Metal and Hardcore Festival?

Doing an interview with Lambgoat. I think it is very cool. The lineup is really solid this year. Probably the most solid lineup we have had in a long time.

I am excited that the festival has been around for 14 years now and we can continue doing this. It is a lot of fun hanging out with all of my friends and meeting tons of new people who come to the fest each year.

Who technically owns the Festival, MassConcerts or Scott Lee?

Massconcerts. I work for MassConcerts and this is something I had brought forward to the company I work for.

The festival normally takes place in late-April. When do you actually start serious work on each year's event? And don't tell me the day after, haha, because you have to take some time off to recharge.

To be honest with you, we start the month before the festival happens to start planning for the year afterwards. It is a non-stop year round job booking and promoting the New England Metal and Hardcore Fest.

We take looks at who is putting out records in that time frame and making a skeleton for an ideal festival for the next year.

During the actual festival weekend, do you get any sleep whatsoever? Do you have a no-drinking policy for yourself or anything like that?

I try to get as much sleep as I can. I do not have a no drinking policy for myself. I like to take some time to have fun with some of my peers at the end of the day. It sometimes makes for some fun and outrageous stories. I don't get to see all of these people who come to the fest very often.

Has there been a particular band that you've been trying to get to play that just won't do it? Be honest!

Slayer won't do it? What's the problem? Is it a scheduling thing, or do they not do American festivals or something?

It's definitely a scheduling thing and I think they look at it as if they can sell the venue out on their own without paying a festival. Hopefully someday we can make it work.

I know Megadeth played in 2008, but how often do you go after "big" bands like Megadeth, Iron Maiden, or Slayer? Is it just too cost prohibitive?

Correct. It is very cost prohibitive. It is very difficult to keep ticket prices low. Nobody wants to spend a million dollars going to a metal or hardcore show.

What was your impression of the guys in Megadeth? Was Dave Mustaine as eccentric as everyone/everything makes him out to be?

The guys in Megadeth were very cool and cordial. Actually, no, about Dave. He was very nice and interested in the festival itself. He wanted to know more about it and the bands playing the fest.

If you could have any metal headliner in the world, and money wasn't an issue, whom would you choose?

Are there any bands that are blackballed from this event for whatever reason? Like, no matter how big they are or how cheaply they'll perform, you just won't have them

Yes. The band Scurvy will absolutely positively never play the festival again. We caught them stealing beer, they broke a bunch of monitors and gear, and they touched too many butts. The bass player got detained by police at the festival for being a total creep. We had to break up a fight between the guitar player and the singer of Shadows Fall, Brian Fair. They are just not allowed back.

Also, the band Scars Of Tomorrow is never welcome back because the singer is a total prick.

So how does the whole payment system work? Do the bigger bands get paid advances, or does their entire payment come after their performance?

Situations vary, but it is usually a full payment after their performance.

It seems like there are more and more metal and hardcore festivals every year. How annoying is that to you, haha? And does their existence devalue the New England Metal and Hardcore Fest?

That shit is annoying. But they usually come and go. I think that we are the longest lasting American Metal and Hardcore festival. So it does not affect our name because we have been doing it the longest.

Every year it seems like you say something akin to, "this is the best NEMHF lineup yet!" I know it's your duty to say such things, but are you ever tempted to say, "Well, this year is pretty good, not as good as 2009, but good. I think the afternoon on day 2 looks pretty weak, but people need to eat dinner at some point anyway"?

I can't do that! I am supposed to say it's the best lineup every year. Come on dude! I try hard to provide the best available and possible talent every year.

Sometimes things don't pan out exactly how we hope, but we put together the best festival we can.

I know that this might be difficult off the top of your head, but what are your 5 favorite all time NEMHF performances?

Deicide and Manowar during the first festival and Earth Crisis being direct to Manowar. Lamb Of God playing at one o clock one year and coming back to headline a few years later. The first time Meshuggah played. Blood Has Been Shed has always killed it at the festival. Blood for Blood's reunion was also a great moment.

To date, which year's festival are you most unhappy with, and why?

2006. We had a weak lineup. Lots of cancellations beyond repair.

Have you noticed any trends relative to security and fighting, etc.? Are things more peaceful than they were say 5 years ago?

Yes. The security at the Worcester Palladium is second to none. I am comfortable enough to say that this may be the best security in the country. People come through all the time and compliment their security efforts.

But yes, I think that the kids have been more scared in prior years. I honestly don't think it is as violent as it used to be in any way shape or form.

They have to do what is best for themselves. I wish them the best.

Killswitch was a staple of NEHMF in the festival's earlier years. Prior to this year's event, why were they absent for seven years or so? Was there some sort of falling out between you guys?

Unfortunately their touring schedule just hasn't matched up with our festival dates. We have tried to make it work but it hasn't come through until this year. We are happy to have them back!

Why hasn't Converge played since 2003?

We had an issue with them on the first year with security. Their situation is something maybe we can talk about in year 15. Jake Bannon and the rest of the guys and I are friends and we would love to have them back sometime.

Whose idea was it to have Oceano play their final show at this year's event? Did the band's management approach you guys about that, or did you reach out to them?

The band's manager Derek Brewer and I started talks about it. He had come to me. I thought it would be great. I can't wait. I am also a big fan of them as well. This is their last big hooray. We want to send them out on a high note.

I hope the big black singer says lots of blasphemous stuff on stage.