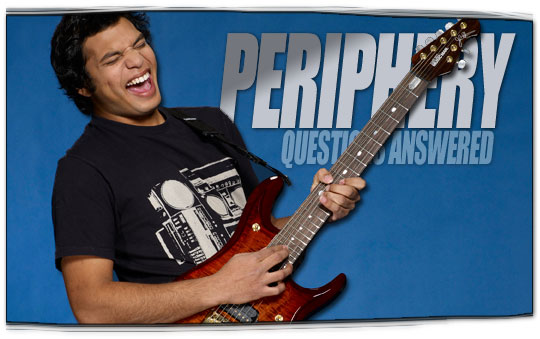 Several weeks ago we ran a contest where fans of Periphery were invited to ask guitarists Misha Mansoor or Jake Bowen a question. The "best" questions would be chosen by the group, with their respective authors receiving a prize, and said questions answered publicly. Well, the winners have been selected (and notified via email) and the questions have been answered. Here you go.

What's it like having Spencer live so far away from everyone else? What are some challenges Periphery faces because of it?

[Misha] It's not the Ideal situation obviously, but its really hasn't worked against us either because in 2011 you really don't need to live anywhere near someone to be in touch with them. He works hard whether he is at home or on tour and he is always sending us new clips and ideas. He just makes sure to be here a couple weeks before tour so we can practice and it's all good!

Your band formed in 2005 and I wanted to know who found the band and how you all met?

[Misha] I started the band as a project, and eventually started finding members who were suitable for the scope of the project. We have been through our fair share of lineup changes, but interestingly enough everyone who is in the band currently joined as a fan of the band, and that is an aspect that has allowed for the project to evolve rather naturally as opposed to having a bunch of differing opinions on how the band should sound.

You're a band known more or less for having a very precise and heavy tone. Did achieving the tone you've set come naturally over time and years of experimenting or did you kinda just figure it out one day?

[Misha] It's been a tweaking process from the beginning and I'm still as obsessed with it as I ever was. Even when I nail that sound that I'm hearing in my head, eventually that starts to get a bit boring and I want to spice it up or tweak it in some way that will keep it fresh; it is never ending and always a fun challenge to me.

Why do you guys prefer to use digital amps over regular amps?

[Misha] We don't even use amps in a traditional sense. We use the Axe-fx because it can go direct to the board, and emulate and go beyond the sounds that traditional amps and rigs can create within a lightweight two-space rack unit. Because we go direct, there are no more variables created by our rigs. No mic placements, no bleed and room sound being picked up by mics, and the settings are saved digitally so they are always the same. This level of consistency has helped us and our soundguy take our live sound to a new level and we just can't look back at this point.

What gear would you use if your Axe-fx gear suddenly ceased to exist?

[Misha] It would be a sad day, but I would probably use either a Diezel VH4 or a Soldano SLO100 or maybe even an Egnater Armageddon head, probably a TC Electronics effects unit, and after going direct I just don't think I could go back to miking, so although I would have an Orange cab on stage, I would have some direct box with speaker compensation on it, maybe a Palmer unit.

Hey Periphery guys, no doubt you've noticed how much debate there is as to whether Djent is a genre or not. Thing is, do you guys (and other Djenty bands you know) actually care? Is it a genre to you or do you just call it metal and get on with it?

[Misha] Honestly before "Djent" became a buzzword or a genre we were still just doing our thing, and the same is true nowadays. I use it in a tongue in cheek kinda way, but really I have always considered Periphery to be a Progressive band first and foremost because it suggests that there is almost no limitation to the scope and range of your sound and style, and I like that idea! So call us whatever the hell you want honestly, it's all the same to us; we will keep on just doin our thing!

To both Misha and Jake: Who were the first musical artists you guys got in to when you were younger, and also who are your favorite non-metal musicians?

[Misha] When I was just getting into music I think it was Michael Jackson, Nirvana, The Offspring, Korn and Greenday. Nowadays I really don't listen to much metal so some of my favorite bands these days are The Dear Hunter, Karnivool, Thrice, Telefon Tel Aviv, Jaga Jazzist, Hiromi Uehara, Fair To Midland and BT.

[Jake] I used to listen to my mom's Van Halen and Boston tapes when I was first starting to discover my own music tastes. As far as non-metal musicians, I really enjoy the work of Telefon Tel Aviv, Prefuse 73, Nine Inch Nails.

You've said before that you like writing material that grooves, while keeping a technical aspect. How would you recommend less experienced guitarist to come up with such riffs?

[Misha] Actually I said that there is no real focus on the technical aspect. That always happens as a by-product of trying to keep riffs creative and sounding interesting, but I would just as easily put a simpler riff in a song if I could get it to sound as good. The key is to play things that sound good to you, not stuff that looks or sounds impressive for the sake of showing off, or at least that's my approach. So just kinda work with what you got, and see what you can get away with!

Misha, as a producers what qualities do you have that make you feel you can help the band create a successful album? What qualities in general do you think a good producer should have? Finally what equipment/plug-ins do you utilize the most in your recordings?

[Misha] I think a good producer can listen and understand the sound the band is trying to achieve, and work with them on any level to help achieve that sound. Whether it's just making tweaks to the arrangements and the palette of sounds that are used, or helping rewrite a song from scratch depends both on the producer and the artist, but I think that good albums and bands come from a healthy dose of communication between the artists and producer. I wouldn't be able to live without Toontrack products, and I absolutely love Properllerhead and Spectrasonics software like Reason, Omnisphere and Trillian!

Do you write the music first or the lyrics?

[Misha] Generally the music is always written first and then the lyrics are written by Spencer when he writes the vocal melodies. In writing for the new album, Spencer actually wrote an entire song himself, so maybe in that case he was thinking of certain vocal lines or lyrical ideas as he was writing, but unfortunately since I am useless with vocals I can't do that myself.

Ever get drunk before a gig? if yes did you miss any notes?

[Misha] I have a few times, not sloppy or anything, just feeling pretty good and I had a great time. It's not something I would do often at all, but if the mood and vibe is right, it can make an awesome night even better. And yes, I played pretty sloppily those times, but the energy and vibe of the show was that I was focusing more on putting on an energetic show than I was trying to play each part as perfectly as on the records. Besides, I miss notes every show, even when sober, haha.

Who snores the loudest?

[Jake] Tom does, and it sends ripples through the very fabric of time.

Do you own a guitar that has sentimental value and what is its story?

[Jake] All my axes have some varying degree of sentimental value, my Ibanez S1625 was the first guitar that I bought with my own money and it's the one guitar I'll probably never part with.

Regarding technology, what is one aspect of touring that is overdue for an upgrade?

[Jake] The way club interiors are designed needs a total overhaul. Unfortunately, it's difficult and expensive but the market would be cornered by anyone who can provide a high fidelity live experience for people who enjoy heavy music.

What do you think that the music scene you're in will be like in 10 years?

[Jake] I hope it continues to reach new levels of popularity, just as long as there is a quality that follows along with the longevity. We're trying to do this for a while and it would suck if it got "uncool."

Other than Nobou Uematsu, what composers of video game music do you guys take inspiration from, or just happen to enjoy the most?

[Jake] Yasunori Mitsuda, he did the soundtracks for Chrono Trigger and Chrono Cross, truly a master at finding the best melodies and textures for the scenes in the game. Also Jeremy Soule for Secret of Evermore and Alexander Brandon for Deus Ex.

Did you know that back in India, Misha is a girl's name?

[Jake] It's the same here too.

Do you feel like metal is a genre you should never expect to make good money in?

[Jake] It depends on what you consider good money. Chances are you're never going to be filthy rich but there is a way to make a sustainable life playing metal, you just have to be as good at being a businessman as you are at your instrument.

If you all were in a horror film which of you think you have the most outrageous, yet strategic way to survive, and what would it be?

[Jake] Since Tom has read a lot of comic books I'm going to put him in charge of saving our asses.

Most bands I know that go on tour say that tour tends to get a little gay. What's the gayest thing that has happened to you guys while on tour?

[Jake] The fact that we have to see everybody in their underwear or worse.

break up gays, you're not meshuggah

i got a question: Why is your band gay?

Psh f*ck the people below you guys are sick!!