By Alex
Josh Grabelle, the owner of Trustkill Records, generously took some time from his busy schedule (read on to see what we mean) to answer some questions for Lambgoat.com.
How would you sum up Trustkill Records in a few sentences? It is a record company that strives to release records by bands that are doing something different. I never liked labels that only have specific styles of bands, I mean, there is room for those I guess, but Trustkill to me has always been about signing bands that have different sounds, keeping the roster diverse, throwing kids for a loop when they pick up a new cd on Trustkill. I always respected Revelation (Records) for that when I was growing up, I always knew that if I bought a cd of theirs, it would be awesome no matter what, but I didn't really know what style of music it was going to be. Ok, the obligatory question, what are you listening to these days? Throwdown * Spark Lights The Friction * Fenix TX * New Found Glory * Idle Hands * J Geils Band * Jay Z * Adam Ant * Eighteen Visions * Shadows Fall * Arkangel * Poison The Well * Elliott * Brother's Keeper * Styx * Most Precious Blood * Stretch Arm Strong * Shai Hulud * Nora * Killswitch Engage * 36 Crazy Fists * By A Thread * Walls Of Jericho * Lifetime * Sensefield * N Sync * The Great Deceiver * Misfits * Grade * Reggie And The Full Effect * Duran Duran * At The Gates * Gameface * Samiam * Merauder * American Nightmare If N'Sync came to you today and offered to put out their next album on Trustkill (with an obvious reduction in salary), what would you say? Ha ha ha ha, that would rule! "Every little thing I do, isn't good enough for you." I love those guys. I don't know what I would do, I mean, obviously I wouldn't know the first thing about marketing a "group" like that. It would kill their career being on Trustkill. Heh heh. You have aspirations of a career in law... how is that going? It's going great, I'm finishing up my last year of school right now, I am in 19th grade, I realized the other day. I just did a clerkship in Manhattan over the summer working with an entertainment law firm and that was pretty cool, learned lots of stuff about the "industry" (ew, what an evil word) heh heh. Once I finish school I plan to move back to New Jersey with my girlfriend and dog where I grew up. We'll see what happens when I get there. 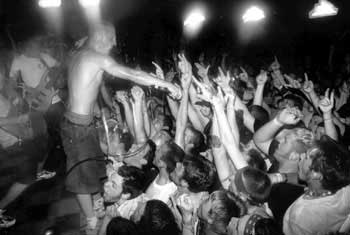 Shai Hulud ----- photo by John Mckaig
I'm not sure how you find the time to run Trustkill, have you hired any employees yet? No I haven't. It seems as if no matter how big the label gets there is STILL never any extra money to go around for anything, like paying other people. I mean, I don't even really get paid, and I do this shit 24 hours a day. When I entered law school two years ago I had been running the label for about 4 years already. I had heard all the horror stories about law school and how hard it was. I thought I had to make a choice betwen the label and school, and for a short time I thought about giving up the label. But I stuck it out the first few months of school and realzied that if I just didn't sleep ever that I could get everything accomplished, and manage to pull off both the label and law school. So here I am, two years later, still doing both full throttle. The thing is, if I gave it up, ten years down the road I'd be kicking myself thinking, "wow, I wonder where I could have taken the label to if I had stuck it out?" and that would have been really shitty. We thoroughly enjoyed the Racetraitor/Burn It Down split. What is the status of Racetraitor? Are any future releases planned? Unfortunately Racetraitor broke up shortly after the release of that split. There were talks of doing a full length album on Trustkill, but then the band disbanded which sucked, I loved that band. They had definite potential and broke up waaaay too soon. It seemed like everyone enjoyed all those songs too, which is cool. When I think of Trustkill, I immediately think Poison The Well. What bands do you think Trustkill is best known for these days? These days I would say you're right, probably Poison The Well and Walls Of Jericho. Those two bands have been doing really well with their new albums and some big tours and stuff. They work real hard and have been just awesome all around. I'm very proud of those guys and I'm psyched to be working with them. Plus, they're all really good guys and gals. If you had the necessary budget, what band or artist would you most like to sign to Trustkill? Slipknot, Merauder, Leeway, New Found Glory, Green Day, Samiam, N'Sync. You're obviously aware of the whole Napster/MP3 controversy. There's no doubt that things are changing in the record purchase and distribution industry. Do you have any plans for adapting to the shifting paradigm? How can Trustkill and other labels survive if artists start releasing material online without label support? Well, if artists start doing that, how will they make any money? And how will they go on tour? Before bands start considering doing things solely "online," there are quite a few problems to be solved first. But about adapting to the new MP3 craze and Napster, the way I'm dealing with it is realizing that you can't just put out a boring and plain cd package anymore. You have to give the kids incentive to want to actually pay MONEY for songs, since they can always just go download them on Napster and never have to leave their house. I'm not gonna lie, Napster is cool as fuck, I love it, I download shit on there all the time. I'm as guilty as anyone else. But I've realized that all my newer cd's have to look really cool and have extra stuff on them so kids will want to have something to hold in their hands instead of just a bunch of 0's and 1's on their computer. I am a firm believer that kids will always prefer to have something to hold then just download songs off the internet. As for the majors, besides making nicer packages, they also have to worry about their price tags. I mean, I would NEVER pay $17.99 for a fucking cd, that is ridiculous. Fuck that, I'll just go download it. Now, if it was more realistic like $10.99 or so, that is fine, I'll pay for it like everyone else. Led Zeppelin or Pink Floyd? Definitely Zeppelin. What are your thoughts on bigger metal labels like Roadrunner and Century Media? I think they're cool. I know the hip thing to do is to slag all the big labels, but if Trustkill was ever as big as Roadrunner, it would be awesome. I definitely wouldn't complain. Plus, a lot of my friends work there, so that's kinda cool. Century Media has always been good to me, we worked together on the Turmoil album and it went smoothly. I really have nothing bad to say about either of those labels, I think they both do a fine job. 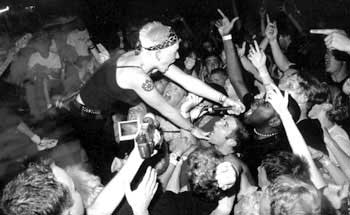 Walls Of Jericho ----- photo by John Mckaig
Do you have any musical skills? When I was younger I played the violin and the saxophone. I played the violin really well and I used to dream about being in Dexy's Midnight Runners' (you know, "c'mon eileen"). Other than that, no, I have no musical talent whatsoever. I haven't touched an instrument since I was probably 10 years old. Do you only sign bands whose material you love? Would you ever second-guess your own musical taste and sign a band that apparently pleased others, but did nothing for yourself? I've always thought about it, and I'm sure it will happen someday, but it hasn't happened yet. Every band I have worked with I love. The thing with me is that I just couldn't imagine myself doing all the work I do for a band, when I didn't like them. Take a band like 'E-town Concrete' for example; apparently kids love them, they've sold tens of thousands of records, but they are really really bad. I couldn't look at myself in the mirror if I was selling cd's from that band, it's just so cheesy. Victory has some good bands and all, but c'mon, you know SOME of those bands, they were just like "alright, this band sucks the big one but I bet kids will buy it." Do you feel you're getting anywhere financially as a label? Do you see the possibility of Trustill becoming an industry heavyweight? It seems the label keeps getting bigger and bigger and things keep getting better, but I never see any money. I guess because as the bands get bigger they want bigger and better things, and that is where all the money goes. It's understandable, you know? As far as a heavyweight goes, I think I'm already there as far as hardcore/metal goes, or at least I'd like to think I am. Either way, there are bands on Trustkill that have turned down offers from labels that I always thought were bigger than mine, so that makes me feel pretty good. If it could pay the bills, would you consider sacrificing your law career for the label? Of course! that is what I plan on doing actually. As soon as I sign the next Slipknot, I'm gonna say fuck the law career, I wanna be punk rock the rest of my life. I would much rather wake up at 10:00 in the morning, throw on some jeans and go watch some of my bands play a big show. That would beat waking up at 6:00, working a 12 hour day in a suit with a bunch of snobby assholes who I hate. Any new Trustkill signings or developments your excited about? Well, I can't really divulge that kind of stuff right here. For updates though, you can always check out www.trustkill.com, it is updated almost everyday. I have been talking to a few bands, but nothing is definite and I would hate to leak some info that turns out to be a false alarm, you know? But N'Sync's management called me the other day and said they were looking for a new label... Any final thoughts? Yeah, checkout the website for sound samples and videos and tons of other shit from all the Trustkill bands. We add new shit every day like interviews, reviews, tour dates, photos, videos, and lots of other stuff. Go to your local store and request some Trustkill cd's if they don't have them. Play some Trustkill music in the local park really loud and piss off some people. Life is short, make the best of it. Get off your fat ass and away from the computer and take a walk in the woods or on the beach.
Tags: Josh GrabelleTrustkill Records

Hell of a review you stupid gay