Sex and nudity have always been a part of the music scene from groupies to album art. Now that we're in this age of technology, there are websites like Is Anyone Up? and Burning Angel that meld music and well, porn. Aside from my personal vendetta against IAU and Hunter Moore, this n00dz epidemic is ridiculous and it seems to be geared towards people in music. Nudity isn't shocking anymore; Courtney Love runs around with her tits out, sex tapes make you a celebrity, and strip clubs are more of a hobby than ever. Is nudity helping music, or hurting it? 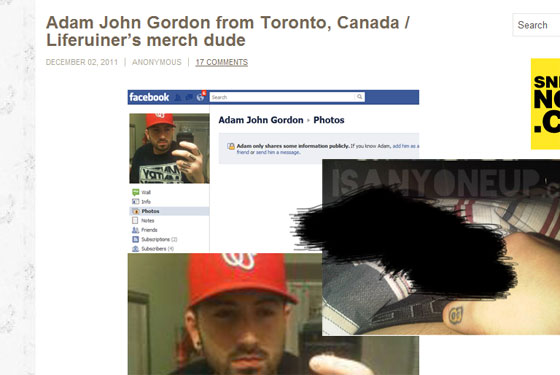 These sites haven't just put more than a face to the name in some cases. Both Is Anyone Up? and Burning Angel have recently sponsored metal and hardcore tours featuring bands such as: Endwell, Molotov Solution, Betrayal and Deez Nuts. While the sponsorship of a tour might not encourage you to pull your pants up and leave your computer screen for the pit, these sites are at least giving back to the scenes that they are exploiting.

For better or worse, having your band's name appear on any nude site might not trade in your beater van for a tour bus, but it might encourage some to actually take the time to listen to your music. We are at an unfortunate point in trends where less is more is a long-forgotten term. More strings, over-production, auto-tuned vocals, a guest spot on every track and every now and then, Kiss-esque makeup. Image dominates music when the most promising demographic is anyone with access to the Internet.

It's all just a gimmick. Most of these sites don't even know how to properly label a band, let alone launch it to super stardom. It's all about the image that you already portray. If you're known for partying, it's just going to solidify that. If you're a religious band who preaches about purity, you should probably hit the confession booth and come up with a really great apology. Don't expect your unknown local band to be on the next cover of AP just because you posted your own dick on the Internet. Unless there are pictures of you banging Scarlett Johansson, no one cares; you are just another band wiener or a pair of tits in a band shirt. Hopefully your music is better than your nudes.

I like that the internet allows 13 year old girls all over the world to get a look at Oli Syke's leathery dong and not just the pre-teen girls he wants to personally pee on.

Such a ridiculous and sickening trend. Bands that get recognition for their junk rather than their music get no respect from me whatsoever. This is just the next step down into the shit spiral of girls getting into "hardcore" because of the hot d00dz. Groupie sluts and the jerkoffs who encourage their behavior gtfo.

I think this bitch should f*ck more people in Emmure while she's pregnant instead of writing boring articles for Lamb Goat.

Although I support sites like Burning Angel and Suicide Girls, I don't think music, of any sort, has a place there. But fun sells, EVERYTHING. So is it not surprising that they co-exist? It is important for people to study, academically and not, to note the evolution of underground music and all that it encompasses. Even if it entails total shit. I may use this for my honors thesis. Still a rad article, and I appreciate when people speak out against nonsense such as this.

Shay honey, I really hope that you don't think you're some kind of journalist? Everything in this article has already been posted on the internet and is nothing new to readers. You have no edge, or writing style. Calling this article mediocre would be giving it too much credit. And the fact you're trying to speak out against nudes/band dudes/iau is pretty comical considering your current boyfriend sends nudes all over the place and you fcked on camera while pregnant.

Of course they nudity and metal go together. It's rock and roll you pussies. You think motley Crüe would be bitching about naked girls? gays.

I won't lie, I was expecting a lot more from this article, considering this content has been around for a while now. I'm really surprised there's nothing in here about his appearance on Anderson Cooper's show or the increasing numbers of articles being posted on sites that don't necessarily specialize in this genre, or even this industry.

This girl keeps trying to say what Hunter posted about her was "false info". Then whats the real story? It would probably be more interesting than this garbage. You're not a writer. GTFO.

This is hilarious. You were one of the most disgusting stories I have come across on IAU and yet you think your opinion on the site matters. Hahahahaha whores.

you came here, read it, good job boosting her journalism endevours. I hope trolling around on the internet pays well. 80% of people on IAU are one slip up away from being posted on there. females: I bet you wish you looked half as good naked NOT pregnant. Keep beating off to barely legal girls/trolling wishing you looked like them...one day your sweet bologna t-ts will get posted & I will probably bleach my eyes out before I post how looking at your naked body made me want to repent.

Great topic at least. Stating the obvious with a level of excitement equal to that of a dial tone? Check! Nothing accomplished here other than making this site look desperate by giving this girl a public forum for her poorly written piece that should have been beyond simple to compose since a: it's been done so many times and b: seems to be the story of this girl's life. Less writing and more sending n00dz to your "boyfriend" (who I'm sure is in some generic shitty hardcore band).

Hey, wow, holy cow. There's a little too much misogyny in this thread for my tastes. Interesting article, I wasn't aware of this specific story. I suppose my ignorance could count against me in the estimation of others, but it keeps my emotional wellbeing and happiness intact, so... I guess I don't care about this? It's not the kind of thing that would upset me.

If, I don't know, say Grutle Kjellson or Mikko Aspa were to do something like this, it might raise questions. As it stands, I don't listen to this garbage anyway. Good article, Shae. Keep at it, Lambgoat needs more good writers.

of course, getting posted on IAU wasn't bad enough.. now i'm on lambgoat..swweeettt.

Thanks for wearing MNTRY Adam. hahaha I couldn't pay for this kind on Advertising if I tried.

who the f*ck is shay?

Shay, this is simply ridic. You cashing in on the fact your had fun with Frankie and had his baby hence you call yourself "cold soul shay" on twitter. Bravo; you would just be another tatted slut who hops on band dudes had you not had his baby. I think it's hilarious you tweet about "nobody ever breaking up with you before" then complain about being in bed alone. Such is life when you're a shallow whore. Wonder how you got this job?

This was almost as funny as watching her try to hold her pregnant gut out of the way while she got one in the c*nt and one in the ass. Look it up on burning angel (which she mentioned ironically enough) get real. You don't know shit on the industry and your extent in music expertise is not laughing (or crying) when palme is beating it up. I sent this to hunter, expect to be a re up you slag.

Palmeri* god I feel as disgusting for giving that dude the decency of a correction as this bitch should for taking his dick.

Article is a snoozer and something many ppl who follow bands already know. Hope your next article is as epic as this one Shay..Keep thinking you're a big deal like Ron Burgundy

Who the f*ck taught you how to write, I believe the real issue here is the fact that this was a "Featured Article." Apparently Lambgoat isn't too keen on an editor.

Lambgoat's a whole entire gimmick in and of itself. Some reviled forum full of gays. What a stupid trend to have a vile forum to promote your site of shitty news. How about we focus on the music here too you f*cking douchebags?

Don't be bitter these guys know how to appeal to a mainstream audience better than most of you workaholic metalheads and hardcore artists ever will. They can pull a song with three twostep and four breakdown parts and will play a sold out local show, because they know how to have fun and apply gimmick for marketing. Your nameless metal band on the other hand, simply f*cking sucks. umadbro?