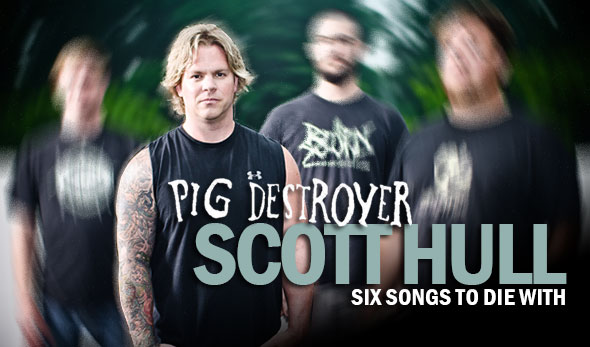 
Scott Hull: So here we are. Another list. 6 songs I could have while dying on a desert island. So, not only would I have the misfortune of being marooned like Tom Hanks in Castaway, but I would also be lucky enough to have the only functioning iPod only capable of holding 6 songs. And who says Wilson and I WOULDN'T eventually build a raft out of bamboo and birdshit and eventually get off that island JUST LIKE HE DID? Oh well, stop asking questions and get on with it.

I have two criteria for including songs on this list. First, what songs/artists/albums really impacted me earliest in my life that I STILL can go back to and listen to on a regular basis? Those are the songs I will have with me until I die. There is only one "newer" song in this list. The reason for that isn't because I'm trying to be some old dick that says everything from the 70s or 80s is better than anything you might be listening to. I'm just being honest with my answers.

Also, people who know me personally know that I almost never can listen to an entire song. I almost always skip ahead to other tracks even during songs that I love on albums that I love. So the second criterion I have is that each of these songs will absolutely command my attention each and every time I listen to them. I never feel the impulse to skip or fast forward.


Scott Hull: This is the first full cut off of Lenny White's The Adventures of the Astral Pirates, released in 1978. As a kid, I was intrigued by this LP cover (Star Wars had come out the year before and Science Fiction was really prevalent in all areas of popular culture). But for me this song/LP really introduced me to the world of fusion, which I still actually regard as my favorite form of musical expression. It was written close enough to the 80s so that the right amount of R&B is mixed in with it's blend of rock and jazz. And I am a sucker for a Fender Rhodes. Nick Moroch's guitar work in this and his other LW/Twennynine LPs is stellar.


Scott Hull: Almost nothing in the world beats a good old school ZZ Top riff. That's actually not even a matter of opinion. It's scientific fact. Provable with a computer. And this is among the top 10 songs across those early ZZT cds that I still listen to regularly. Such groove, such attitude. Such facial hair. Even before mankind exisited, the ZZ top groove existed as some fundamental force of nature. These dudes just harnessed it and can wield it like gravity or EMF.


Scott Hull: This was my first real exposure to punk rock. And it was totally by accident. I didn't even hear the record first, I saw this video on some Albuquerque community access channel in 1984 and it blew me away. One year after Kill Em All came out, I was almost a complete metalhead and liking punk was verboten. Punks and metalheads had different walls to hang out at in middles school and high school, and there was no crossing those physical boundaries. But this song was so catchy and snotty (along with how rough and ragtag this video is) that I really started to dig into punk. Along with a lot of other metalheads apparently, because crossover was just around the corner.


Scott Hull: Another gem I discovered in my parents LP collection as a kid, Eddie Harris' Is It In was KINDA like fusion, but more of a super funky version. SUPER funky. I must have listened to this entire LP hundreds of times as a kid. And yes, that is an "electric saxophone." Something that Eddie Harris actually created, along with modifying the standard trumpet to have a reed mouthpiece. So, not only were these mid-70s records from EH funky, but they had interesting new sounds. I was fortunate enough to see Eddie Harris at the Village Vanguard in NYC back in the late 80s. One of the best shows I've ever seen. Wow cool, I got Eddie Harris on Lambgoat. Hang in there, Eddie Harris does the solo intro for about a minute in a half before the song really kicks in.

(the wrong LP cover is displayed in this video)


Scott Hull: One of the most suffocatingly beautiful pieces of music ever created. Along with Gorecki's 3rd (which I also borrowed heavily from for Requiem), this piece really speaks for itself. All words describing it or praising it are drivel. Its merit is self-evident. And it is timeless.


Scott Hull: Gotta have some music for when it's time to get weird. I have a lot of it of course, but this is where it all started for me. Discovering TG's DOA The Third and Final Report back in the early 80s was about like discovering the world's first snuff film. I was absolutely horrified by it and had to own it, even though I couldn't bring myself to listen to it frequently. I learned pretty early on that music that sounded "weird" to me was only weird because of my lack of exposure and ignorance. The more you open yourself up to different stimulus, the more you can grow. The more you can evolve and, as Bill Hicks said, get the fuck off this planet.

Excellent list! As diverse a c intelligent as expected of a pig destroyer musician. Small minded people stitched to their genre fascism need to read and learn, music is universal

I'm not really into most of it. BUT! If it weren't for all of those musicians, we wouldn't have some of the greatest grind out there!

if you listen to all six songs at the same time it sounds like pig destroyer.

did what anon said and played all six songs at the same time... shit got awkward when it was only black flag and sigur ros.

I just love how it's so hip for metal dudes to list a bunch of non- metal stuff. Like... "Whoa- he is really smart! He listens to other stuff besides metal!!" We get it, you're not a dumb metal head, I bet he has Hugh Honours 'Romanticism' on his expresso table, a book he never opened.

Do you listen to only metal?

"I just love how it's so hip for metal dudes to list a bunch of non- metal stuff. Like... "Whoa- he is really smart! He listens to other stuff besides metal!!" We get it, you're not a dumb metal head, I bet he has Hugh Honours 'Romanticism' on his expresso table, a book he never opened." Wowwwwwwwwwwwwww. Sucks to be you.

''Also, people who know me personally know that I almost never can listen to an entire song. I almost always skip ahead to other tracks even during songs that I love on albums that I love.'' Now I see why he is making grindcore.

if everyone wants to be honest, those songs all suck.