Keith Buckley (Every Time I Die): Six Songs To Die With 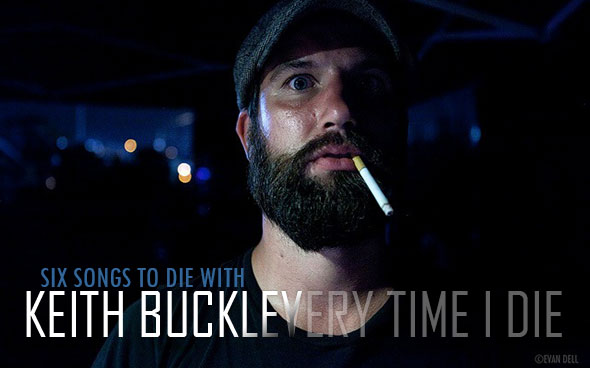 Every Time I Die has been a staple of Lambgoat coverage since our inception roughly 12 years ago. We've interviewed the band a few times, and if you know anything about them, you know that Keith Buckley, Jordan Buckley, and Andy Williams are all solid dudes. We can't have a feature series on Lambgoat without having a member of ETID participate, so we contacted Keith Buckley. He kindly obliged, and in the absence of instructions from us, chose a more literal approach to our assignment (perhaps inspired by Greg Puciato).


Keith Buckley: I'm pretty sure none of the songs I would chose "To Die With" will align with what the Lambgoat message board would prefer to hear while watching me die, but I'm going to do this anyway because I was asked to and I enjoy music sometimes. Keep in mind that while they are not particularly what I currently enjoy most, if I was slowly bleeding out on the floor of a stranger's apartment and absolutely needed to crank some tunes, I would be driven by nostalgia alone. So, here goes.

"Carolina In My Mind"


Keith Buckley: Inarguably the most soothing song ever written, and considering I am losing an astonishing amount of blood from the numerous wounds in my torso, being soothed is a priority. When I was very small child my parents would put James Taylor on the stereo and put headphones over my ears. They assured me that everyone could hear the music I was hearing so I would sing loudly to this song while they and their friends laughed. I was oblivious. I had music and that's all that mattered in the world. what an incredible feeling that must have been.


Keith Buckley: This would not only be appropriate since I was, in fact, being slaughtered, but it would probably get my heart racing and therefore help me bleed out faster which would in turn end my suffering. This song has my favorite Pantera riff. I saw them live in 1994 and exactly 10 years later Dez from DevilDriver was telling me that Phil "didnt feel like talking" when some friends and I tried to introduce ourselves at Ozzfest. Sean Martin, who was in Hatebreed at the time, is still mad about that.


Keith Buckley: Paul Simon is my favorite lyricist in the world, so obviously I would like to take a moment while a plastic bag is being placed over my head to reflect upon how beautiful the human language was before I can no longer speak it. This is a shining example.

"Party In The USA"


Keith Buckley: I mean, c'mon. this song is catchy as hell. Also, on my wedding day, one of my groomsmen insisted on playing it on repeat while we all put on our suits and drank whiskey. It was a wonderful time in my life. I would hear it as my last breaths were drawn and think about how radiant my wife looked. I would also wonder why those very same friends were not coming to my rescue and if they could have known that my death would be a direct result of them leaving me to drink alone with some people I had just met at the bar the night before.

"These Arms of Mine"


Keith Buckley: I just want his voice to be the last one I hear.

f*ck you and f*ck this #firsttohate

Respect the list but we would love some more hate. Thank god it was not all breakdown songs.

haha let the haters f*ckin hate. this list is golden.

Seems, they could have been fusing Buckley into Every in the title,....but still I agree...pretty obtuse! This list isn't entirely garbage...but probably wouldn't opt to die to any of these...

Featured image on this article "Ery Time I Die." Too bad photoshop doesn't include spell check eh lambgoat? we combined the "EY" in Buckley with the "EV" in ETID, goofball.

That beard has Fitzmagic all over it!

thanks Keith, just jerked off to the miley video

Of course he likes Tom Waits. He's a good man.

Lackluster. But then again, it's the guy from Every Time I Die.

this is how i expand my music library

My apologies, webmaster --Guy who thought he was correcting your spelling

Upon my third return to this article I see you guys have changed the picture to make your "pun" more obvious. Looks like my comment got through to you after all... --Loser who keeps coming back to the same article

good shit. also, my "captcha" is retarq, and i find that hilarious.

At least Miley Cyrus is on it. Every culture loves Miley.

At least it's not a list of token crust punk or grindcore. My six songs for today: Cheap Trick-If You Want My Love, Missing Persons-Windows, Kix-Cold Shower, Aerosmith-S.O.S. (Too Bad), Dream Theater-Another Day, Queen-In the Lap of the Gods… Revisited

I laughed, I cried, I broke a hip.

looks like every time he dies, it's going to be of lung cancer.