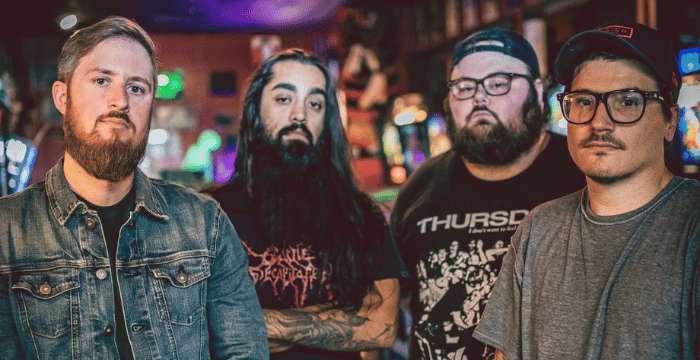 Arizona metalcore outfit American Standards has dropped "The Dealer", a blistering new track and video tackling themes of existentialism and self-doubt that consistently hangs over and haunts so many.

Their music is as harrowing and bleak as the song's subject matter, with their brand of chaotic metalcore bringing to mind now-defunct bands like The Chariot and Every Time I Die's early material married with the anthemic urgency and gang vocal chants that have become hallmarks of punk and hardcore.

“It’s easy to make excuses for putting off taking the first step towards something you want. More often than not, the real reason is self doubt. The Dealer is about throwing caution to the wind and believing in drive and perseverance over fate.”

“We’ve been a DIY band for the better part of the past decade. No money, limited connections, and debatable talent. That’s never stopped us from giving it everything we’ve got though. If it wasn’t for that mindset, I wouldn’t have had the majority of experiences and friends that I’ve made through them. We have no delusions of grandeur, but the band makes someone say 'I want to do that' or 'Check out these jackasses. I can do better'; I’d love to know it’s inspired someone to take action.”

They named themselves after a toilet? Sounds about right.

Only seen them once, was high energy and rad

Some of the best dudes

5 people are stoked the rest of the world is not

Amazing feel in this song. I think you found a new fan

Based on the twats in this band, it appears America has zero standards. This is what you get when you keep making unlimited sized clothing rather than capping it off at XL. People have no incentive to stay a healthy weight and body shape. There's always 5 more sizes above yours regardless of how morbidly obese you are.

Isn't that the same name as the album by Seven Mary Three that had that song "Cumbersome"?

"The dealer" is what these tubbo's call doordash

Quite possibly the best song I have ever heard.

full easy and very simple online money earning job to makes dollars online. from this job i have made $64296 in just 4 months. i just gave this work my spare time after my whole busy day because i am a student and this job changes my life completely. so simple work no special skills required for this job. get this by follow instructions on this page.https://www.payto5.com