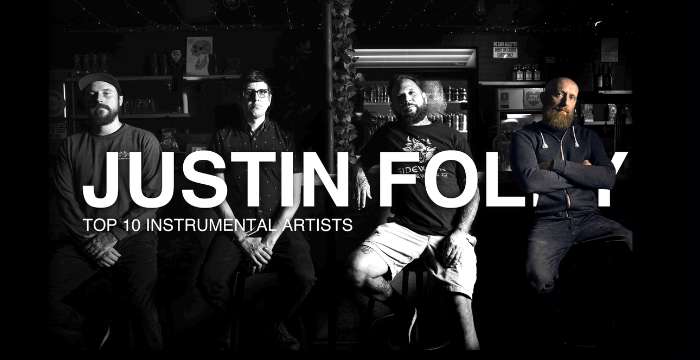 Inspiration strikes anywhere, and ideas are only as good as execution. So when Killswitch Engage drummer Justin Foley announced he was picking up a guitar, and forming a new instrumental band, Lybica, we were intrigued by what sparked the idea. Luckily, all we had to do was ask.

Lybica will release its self-titled debut album in just a few weeks. Check out Justin's own top 10 list of instrumental artists below. Then do yourself a favor, and pick up the Lybica debut when it releases on September 16, via Metal Blade Records.

Justin Foley: The Audio Medium is my favorite record of all time. It's perfect. I remember when I first heard it I was sad that I wasn't in that band. It was all I ever wanted from music. I use a Schecter Semi-Hollow Body guitar for some LYBICA songs because Daryl did on that album.

Justin Foley: I'm cheating a bit here because they occasionally have vocals, but, whatever. They are my favorite band and have massively influenced how I write and how I chase tone. I watch their KEXP studio performance probably every other week. "Gone In Bloom And Bough" is otherworldly.

Justin Foley: Another slight cheat. Maybe the best sounding show I've ever been to was them in Miami on the Rave Tapes tour. They have excellent song titles too, something that is oddly difficult to do with no lyrics. "Killing All The Flies" is a great example of the mood they can capture that seemingly no one else can come close to.

Justin Foley: I found out after the fact that they were playing in another venue in the same building the night of a Killswitch show and I missed it and I'm still not over it. They've mastered the looooooong crescendo. "Nowhere, Now Here" is a good example of their epicness.

Justin Foley: I am finally gonna see them for the first time and I can't wait. The band thrives in a darkness that is really unique. They can get super heavy, too, like "Kohokia".

6) Explosions In The Sky

Justin Foley: Reverb goals. The Earth is Not a Cold Dead Place is a standard, really. Any band wishing to forgo vocals should study it, and I absolutely have. I'd love to be able to write something reaching that level of power without distortion, but it's hopeless. They've cornered the market.

Justin Foley: Their drummer is ridiculous. One of the best I've ever heard. Their use of vibraphone, mixed with their percussive guitar style, creates something super original. "The Secret To Quiet" is clutch.

8) This Will Destroy You

Justin Foley: I've totally worn out my copy of their self-titled record. I love everything about it. There are so many perfect guitar tones on that album, they just nailed everything.

Justin Foley: If he were alive today, he'd be in CULT OF LUNA. Some people have a bit of a hang up with vocal-less songs, but there are about a billion orchestral pieces by very famous people that seem to prove that it can reach and move an audience. His "Symphony #5" is the heaviest goddamn thing I've ever heard.

Justin Foley: Ok, this is a HUGE cheat as they are not an instrumental band, but they have long instrumental sections and are probably the biggest influence that kick-started LYBICA, so I'm including them. I even originally wanted to name the band "OCEANIC" in tribute to one of the best records ever made. They really hit on something special and if LYBICA can just once capture half of the majesty they regularly produced, I'd consider it a success. Listen to "Hym" and then think about life for a while. I do all the time.

Oh cool... every instrumental album every hardcore fan said they listened to. Im sure this side project will be really interesting

There's so few instrumental bands worth listening to, dude had to have half his list be bands with vocals.

1. If These Trees Could Talk 2. Pray for Sound 3. Sleepmakeswaves 4. Buckethead 5. Passport (best track is Jadoo) 6. Bela Fleck 7. Weather Report 8. Thomas Luis De Victoria (a cappella but still deserves to be on this list) 9. Yawning Man; 10. Tycho

Covet could be swapped out for most bands listed.

Props on The Cancer Conspiracy... but Shostakovich would have the good sense to avoid Cult of Luna.

I mean, missing the best/most insane instrumental band I can think of - Sleep Terror!