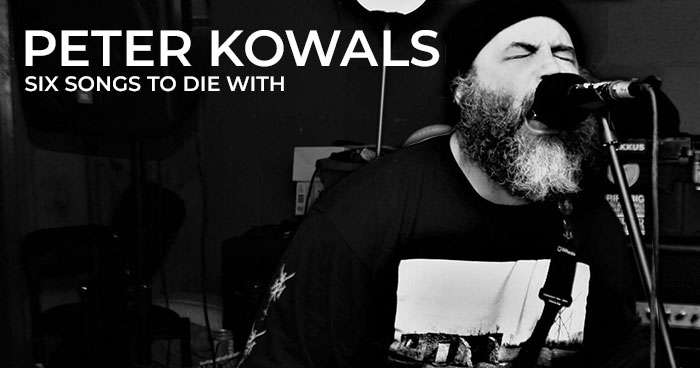 We have neither the budget nor the imagination of BBC Radio, so we've borrowed from their Desert Island Discs program to bring you our own scaled-down version, dubbed Six Songs To Die With. We ask a noteworthy musical guest to select the six songs they'd be stranded with on an obligatory desert island. Hypothetically, said guest will be dying on this island, so they've been advised to choose wisely. Selections appear in no particular order.

Peter's current band, Ether Coven, will be releasing their sophomore album 'The Relationship Between the Hammer and the Nail' through good Fight Music this Friday (August 5th). Do yourself a favor and go pick it up.

Peter Kowalsky:How do you pick 6 fucking songs? Music has been my obsession since I was a child and I own more records and CDs than I care to admit. So I tried to list songs that have had an influence on whatever it is I do that I could also listen to over and over and over and over. I am a firm believer that music heals and is so much more than just some strings on a guitar or keys on a piano. It’s more than spotlights and $40 shirts and loading bass cabs up flights of stairs. It’s more than a 9-month turnaround time for vinyl and more than bands skipping your town because you live in Monowl, Nebraska. It’s a way to connect to something that makes you feel less alone in a fucked up world, and when I was a kid I needed it. As an adult, I need it more than I ever thought I would.

"Not In A Million Years"

Peter Kowalsky: As underrated as they come. This was, hands-down, my favorite Ferret release. Imagine fusing Black Flag with Converge and sprinkling a little Cave In for melody. This was the first band RN went on tour with and they blew my little baby mind. I hadn't necessarily truly grasped what I was watching, all I knew was the guitar player played like he had extra fingers and you never knew if the singer was going to bite someone’s face. This is the opener of their first full-length and sets the tone for the rest of the record. Everything about it is explosive and still feels really fresh, even if it came out 20 years ago. Their entire discography rules, but this is one of my favorite records of all time. In my “more mature years” I appreciate them so much more than when they were an active band.

(Editor's note: Trying to look for any Suicide Note material online is like finding a needle in a haystack. So you don't get the song Pete mentions, but at least you get one, and it's literally one of the only videos that weren't live from 20 years ago. Sorry. If you find the track anywhere, even audio/streaming only send it and we will post it.)

Peter Kowalsky: When I think of truly inspiring and influential songs to my musical journey, this song / record / band immediately comes to mind. They were one of the first hardcore bands I got into as a kid and they left some kind of wild impact on me. I first heard Hand of Hope and I was hooked, but when they dropped this, it was on a whole different level of shit I had never heard, and it was like seeing god. This song in particular showed me that it was vital to criticize your government when they are fucking up. They were saying things that I always felt but couldn’t express, things that we were told we absolutely shouldn’t express or even think about, and things that none of the bands I listened to were talking about. Vegan straight-edge hardcore kids trying to rip off Slayer with strong political beliefs…Perfect.

Peter Kowalsky: One of the best MCs to come out in the last 20 years, featuring possibly the best Method Man verse of all time. Griselda Records has been bringing that grimey hip hop sound back for some years, reminiscent of Wu-Tang, Mobb Deep, Big L, etc… When I first heard this record / track it was really a breath of fresh air from all the goofy bullshit that’s been coming out in the last few years and it reignited my love for the genre. It's like meeting someone for the first time and it feels like you’ve known them forever but in music form. Most Conway tracks are absolute heat but the cadences on this song are nuts.

Peter Kowalsky: When this record first came out, the original bass player of RN, Dre and I were on the way to practice and put this on for the first time. 10 seconds in we looked at each other and realized everything was about to change. I was a fan since Petitioning, but Jane Doe not only raised the bar for them, but for hardcore as a whole. The drum performance is fucking nuts. When I write guitar parts, it’s usually with Ben Koller’s drumming style in mind because of this record. This is the first track off of a record with zero filler. Just gut punch after gut punch of furious and passionate hardcore with a grimey recording that fits the mood of the songs. This is a prime example of an absolute perfect record.

Peter Kowalsky: I rarely listen to songs on repeat, but this is a huge exception and I could easily go another hundred times. This track is relatable on some level or point or line or another. I usually go for more aggressive hip-hop about more violent things, but this pulls me in different directions emotionally. Billy Woods is definitely more on the artsy side and is a master of clever lines. “I wanna be alone in your home, I wanna suck the marrow out the bone…” That line hits me harder than it should probably. I met the man once. He was cool.

"Call Out My Name"

Peter Kowalsky: One of the smoothest, yet saddest songs. This song is all heart. I didn’t expect to put what I guess is a pop artist now on this list, but I know him as the R&B singer who writes songs about drugs and fucking. It all started with Echoes of Silence for me, which was a brilliantly nasty record. This EP is probably my favorite release from him just due to the hint of sadness throughout. I was trying to get Ether to cover it but just hasn’t happened…yet. I never intended to be influenced by The Weeknd, but he has a very clever way with his melodies that have an underlining grief that just sticks. I remember driving around Tampa with Devin [Estep, Ether Coven guitar player] when we were recording our last full length with Erik Rutan, trying to figure out a melody for the song “This House is a Tomb of Memories” while listening to The Weeknd. After about 20 minutes I put the rough of the song on and came up with the melody for the chorus and it’s one of my favorite songs of ours to date, partially because of it. I do believe some of his influence shows in a song on the new record called “Consequences of Self.” I’ve always gravitated towards more angry or miserable-sounding shit because it’s more impactful and relatable than the inverse.

Marty from Zao here. All six songs I'd pick are off Women and Children Die First.

Now these are cool. You should do more of these and less of that one guy just picking the most underground albums he can think of to keep up his stupid personality of thinking he's cool because he listens to it. Like much less of that guy.

Amazing to see Suicide Note on here. Truly one of the most underrated records ever made.

*Tubular Bells-Eminating Out Of A Surgery Room, While A Woman Is Getting Her Tubes Tied.*

Please give us this once a week.

Saw Suicide Note in Gainesville at the Fest. I ran through the streets to the venue, super excited. They rocked.

The Suicide Note discography is at Bandcamp tho. https://suicidenote.bandcamp.com/album/youre-not-looking-so-good

What a f*cking poser, f*ck outta here with that bullshit.

Is Mean Pete still crying about hating cops like he is still in high school and got caught smoking weed under the bleachers?

You dont have to be young to smoke weed and stare at young clean pussy underneath the bleachers.

That's not only true, it's also benefitting from an overall lack of inaccuracies.