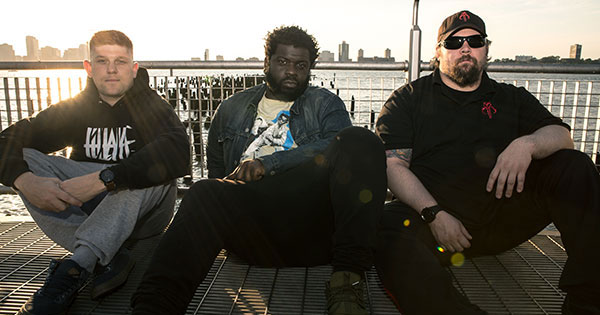 If you frequent Lambgoat, you may be familiar with experimental metal act Circuit of Suns. Though not as prolific or active as some of their peers, the New York trio has surfaced periodically during the past few years to announce tour dates or unveil some new music. Fortunately, they've become more active as of late, and now have a brand new song and music video ready for public consumption. As such, today we're exclusively unveiling their latest composition, "Purge/Replace/Repeat," a relentless and frenetic assault of technical metal, ultimately augmented by a thoughtful layer of melody.

The new song was produced by Shane Frisby (Unearth, Bury Your Dead) and its Alex Kouvatsos-directed video can be found below. Notably, the clip features The Last Ten Seconds of Life vocalist John Robert Centorrino as the lead character.

Vocalist Mo Kofuma comments: "This song sonically and lyrically is a reflection of what's going on inside all of our outer and inner worlds, individually and collectively, with the mania that ensues... Huge thank you to our good homie John Robert Centorrino from Last Ten Seconds Of Life, he really makes the video work; somebody get this guy in a movie ASAP!"

Meanwhile, drummer Mike Ranne (who also plays in Through The Eyes Of The Dead) adds, "Purge/Replace/Repeat was a track written to showcase the band's technical side. We tried to pull off something different while still retaining what we always do and I feel like we succeeded in making that happen."

Check out the video, and if you're into it, keep up with the band through Facebook. Also be sure to catch Circuit of Suns live later this month as they do some touring with Aegaeon and By The Thousands.


Tags: The Last Ten Seconds of LifeJohn CentorrinoCircuit Of Suns

holy smokes this is insane

Dope band. That's a no brainer!!

Probably the freshest song I've heard in a minute

for an underground band, this is pretty damn polished... absolutley impressive, I got completely lost in that music...

yo this is some cool shit

I hate this band because I'm a f*cking racist!

These guys are dope as hell

I didn't know Leslie Jones from SNL is in a tech-core band!

Pure garbage. Here's an idea let's start a band and mash a whole bunch of crap together and play it as fast and spastic as possible. They have some skill level but it seems as if the guitarist just wants to master bate his riffs all over the other musicians. The singing/clean vocals. If that's what you want to call it. Really poor.

I heard the second album is all just guitarstarbating and it's gonna shoot all up in your sloppy ear pssy.... trick.

Won't be listening to it unless I get bored and want a laugh.... ho.