you play in a successful deathcore band, but you're not earning a living

Your metal band has 500,000 Facebook followers? You're still a pauper. 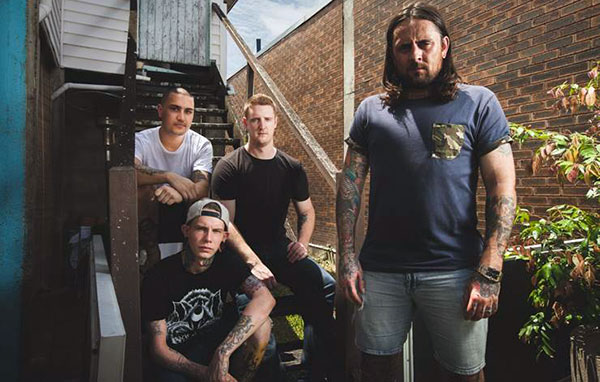 Yesterday, Thy Art Is Murder frontman CJ McMahon announced his departure from the band. While McMahon had several reasons for leaving, chief among his concerns were ongoing financial woes. In his exit statement, he had this to say:

"To put the finances into perspective for you, I/we have earned between $16k-$18k each over 6-7 years, I feel there is something massively wrong with this, I will not live like this anymore."

It's unclear whether he means $16k-$18k total over the course of his time in the band, or $16k-$18k each and every year. Because the former seems unfathomable, we'll assume he meant $16k-$18k per year. That's still a pretty paltry figure though.

In case you weren't aware, McMahon and his deathcore bandmates hail from Australia, which doesn't use the U.S. dollar. Factor in the exchange rates, and he was earning somewhere around $13,000 per year, less than $7/hour at a full-time job. This isn't even minimum wage (which in the U.S. is $7-$10/hour depending upon one's state), and it's certainly not what you would expect from a full-time musician touring the world in a moderately successful band.

I'm sure there's no 401k, paid time off, or health insurance with that gig either.

No, Thy Art Is Murder isn't Metallica, or Lamb Of God, or even Suicide Silence, but as metal bands go, they're sizeable. They've toured the U.S., Europe, and Australia many times, have played Mayhem Fest and Summer Slaughter, among others, and are signed to Nuclear Blast Entertainment (UNFD in Australia). Their last album debuted in the Top 10 in their native country, and the Top 100 in the United States. True, your father won't know who they are, but your cousin might.

The shitty state of the music industry for anybody but its biggest stars is well-documented.

It's one of the reasons many bands have turned to crowdfunding. Cut out the middle-man and put more money in your own pockets. Protest The Hero reaped quite a windfall three years ago. But you have to have the right fanbase to pull that off, and you must obviously be free of a recording contract (i.e. the middle-men).

Crowdfunding exceptions aside, if you play in a decent-sized band full-time and are older than say 25, you're likely better off stocking UPS trucks, working in a shoe factory, or posting YouTube parody videos.

If you're 32 years old and ready to start a family, like McMahon, you have little choice but to abandon your dreams and move on.

Get a real job

You got the exchange rate the wrong way around, his $18k australian is actually only about $13k american. He's making way less than a full time minimum wage job.

Yeah, i just fixed that a few minutes ago. Thanks.

Here's the thing... The guy isn't giving up his dream. He attained his dream. He toured full time for a long time. That IS the goal. If the guy's dream was to make a good living, he picked the wrong genre of music, and really the wrong career. If the guy's dream was to tour the world playing heavy music, he f*cking did it. He lived it. Time to move on. Happens to the best of us.

You can try actually making music that does not sound like 3,000 other shitty, unoriginal, uninspiring, bands.

Another Sonik Garcia lol at lease they lived the dream. Best wishes to CJ.

there is nothing "massively wrong" with this, and thats just about what i would expect a guy in a band like that to make. music is art, and a f*cking hobby, not inherently a career or something you deserve to make a living off of. only a handful of people can actually maintain and pull off a sustainable living. its fine if he doesnt want to live that way anymore, but to act like some great injustice is happening to him, f*ck off.

90 percent of bands make unsustainable livings. were not all "born hustlers" like Butt Chin Chris Fronzak

That haircut + jean shorts + ill-fitting shirt = thy taste is screwy

Staying overnight in your van in the middle of winter in St. Louis really doesn't fit the "traveling" the world. Gets old quick.

thy art is bitching out. lot of bands keep going who make less.

Dude, be thankful you got to a tour in a band. playing music is not a way to get to rich, it is a hobby of expression. It's very rare to turn it into a well paying career. You were living the dream for many years, be humble about it. Now to go get a real career that can support you and your family.

what the f*ck did this dumb shit expect playing shitty "deathcore" full time? a f*cking mansion with 6 cars? what a dumb f*ck.

In this thread - Bunch of kids who never had to start a "career" in their 30's.

^^ shut up CJ you've had you're bitch, bitch

i assume everyone posting here doesn't remember what it was like, when middling bands sold 100,000+ records every couple years. album sales alone could pay the rent. nobody buys records anymore, and kids will still bitch about ticket prices. ($10 in 2015 is f*cking bullshit.) don't you want your favorite bands to be able to keep putting out records? don't you think they deserve a decent living?

he got that shirt with the camo breast pocket from a Brooks Brother's Outlet Mall lol...how do I know? Because I've got the same shirt from the same place. VERY Metal. And dude forgot to size up.

Stop wasting your money on bad tattoos and scene clothes.

You guys are freaking stupid. If the band doesn't make money they can't afford to make music and tour. Especially if you have a family like CJ. CD sales used to pay the bills but nobody wants to even pay $15 for a concert anymore. Calling CJ a bitch for not being able to do it is f*cking stupid. He is a really nice guy and clearly cares about his family enough to give up on the dream because he has to put the family first and can't support them touring. Idiots. - Shelby