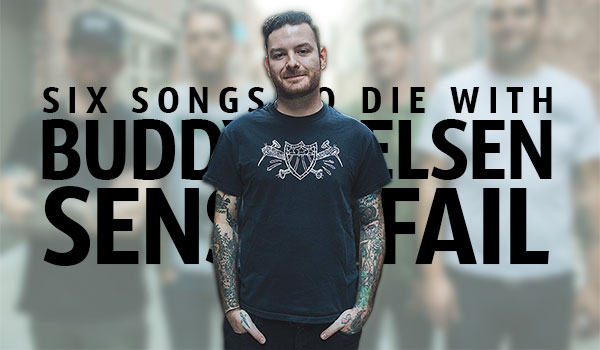 Since forming in 2002, New Jersey band Senses Fail have been serenading the music world with various blends of post-hardcore, punk, and rock. They've toured the world several times over and have sold roughly a million records. But for all of their success, vocalist Buddy Nielsen has never been afraid to take chances. He's willing to speak, write, or sing about what's on his mind, and with the recent release of the band's strikingly heavy new album, Pull the Thorns from Your Heart, we thought it would be the perfect time to ask him to choose Six Songs To Die With.


Buddy Nielsen: One of the first hardcore records I ever heard. It is the reason why we wanted to record with Steve Evetts.


Buddy Nielsen: Give more, give everything, give blood. The only band that I will go see every single time they are in town. I love them to death.


Buddy Nielsen: My personal favorite song of all time. An ex-girlfriend of mine gave me this record when she started dating someone else. He had given this record to her and circled the song. In a really weird way it became my song separate from the two of them.


Buddy Nielsen: Still the best punk band to ever exist. When I first heard them when I was 16 it was like a light when off and I realized nothing else mattered in life other than music.


Buddy Nielsen: Number one sleep jam when I was in high school. I first heard it on the EP before it was on Clarity I believe. I was spending the summer of 2000 away at various camps and it was my jam to fall asleep to.


Buddy Nielsen: I love this band, more people need to love this band. Their music shaped my desire to explore different types of approaches to playing music, as well as listening to instrumental music. This record is one of their more catchy records, but it was a gateway into their Low Level Owl stuff which is what got me into post rock and instrumental music.

not a bad list. none of these would appear in my six, but you could do far worse.

This are pretty good picks. Definitely grew up east coast.

No Life of Agony or Against Me!?

that AN shirt looks a little worn in/out

Good list. This guy's new album is actually dece too

lol @ the lyrics in that last song